The Boss and his wife Patti Scialfa are 'excited' when attending the swearing-in ceremony for their third child Sam Springsteen as one of New Jersey's newest firefighters.

AceShowbiz - Bruce Springsteen and his wife are proud parents of a new firefighter. On Tuesday, January 14, the "Born to Run" hitmaker and Patti Scialfa witnessed their youngest son, Sam Ryan Springsteen, being officially sworn into the Jersey City Fire Department.

Attending the ceremony held at City Hall, the multiple Grammy winner and his E Street Band member wife were reportedly beaming from the front-row seat. Asked by the press how he felt, the singer-songwriter stated, "This is my son's day, so I'm staying out of it. We're very proud. We're very proud."

The "Streets of Philadelphia" hitmaker went on to express his delight that 26-year-old Sam managed to be one of the 15 new recruits. "It was a long road, he's very dedicated, quite a few years and we are just excited for him today," he gushed.

Patti, on the other hand, made use of social media to congratulate Sam. "Follow that dream," she wrote in the caption for an Instagram photo of her smiling son in uniform. "SO PROUD and Happy for you!! Congratulations to everyone who was there yesterday.... Thank you and stay safe!!!"

Also confirming the attendance of Bruce and his wife was Jersey City Mayor Steve Fulop. "The Boss @springsteen + Patti visited us in #JerseyCity City Hall today," he tweeted along with photos from the event. "They're such nice ppl. We got to spend some time in my office talking about music but more than that they're proud parents of a new JC Firefighter." 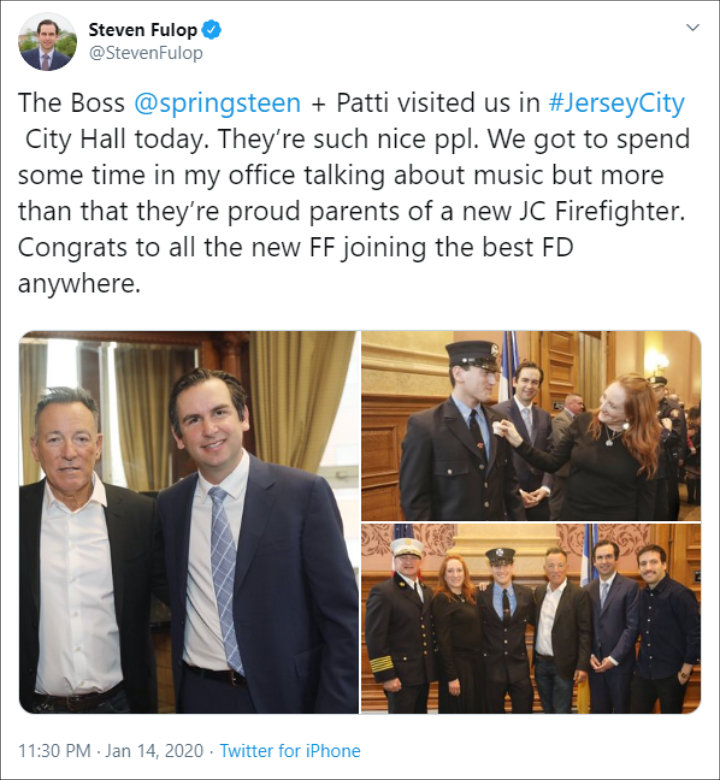 Steve Fulop shared on Twitter about his meeting with the Boss and his wife.

In addition to Sam, Bruce and Patti are parents to 29-year-old musician Evan James and 28-year-old equestrian Jessica Ray.

Bruce Springsteen: Donald Trump Doesn't Have a Clue as to What It Means to Be an American