AceShowbiz - Mark Hamill has bid Facebook goodbye. The actor best known for his portrayal of Luke Skywalker in the "Star Wars" film franchise announced on Sunday, January 12 that he decided to delete his account on the social networking site because of its political-ad policies.

Condemning CEO Mark Zuckerberg's decision against policing political ads for misinformation, the 68-year-old actor tweeted, "So disappointed that #MarkZuckerberg values profit more than truthfulness that I've decided to delete my @Facebook account." He added, "I know this is a big 'Who Cares?' for the world at large, but I'll sleep better at night."

Along with "Patriotism Over Profits" hashtag, the "Con Man" star emphasized his statement with Malaysian flag and a bag of money emojis. Hours later, however, he seemed to have realized he used the wrong country flag since he replied to his initial tweet with a U.S. flag before a greater-than sign and the bag of money emoji. 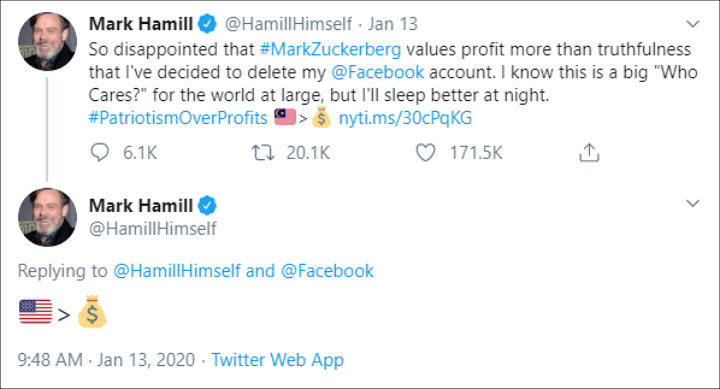 Hamill's statement came days after Facebook stood by its freedom of expression ground over its policy that allows politicians to run adverts containing false statements. On Thursday, January 9, Director of Product Management Rob Leathern said in a blog post, "In the absence of regulation, Facebook and other companies are left to design their own policies."

"We have based ours on the principle that people should be able to hear from those who wish to lead them, warts and all, and that what they say should be scrutinized and debated in public," Leathern stressed. Still, he noted, "We are not deaf to that and will continue to work with regulators and policy makers in our ongoing efforts to help protect elections."

Hamill's tweet has drawn more than 17,000 retweets and 151,000 likes since it was posted. He was not the only celebrity that has taken drastic measure to express disappointment at Facebook. In early February 2018, comedian Jim Carrey left the platform upon learning it "profited from Russian interference in our elections".

"I'm dumping my @facebook stock and deleting my page because @facebook profited from Russian interference in our elections and they're still not doing enough to stop it," the 57-year-old wrote at the time alongside a meme mocking Zuckerberg. "I encourage all other investors who care about our future to do the same. #unfriendfacebook."