The 'Grindhouse' star has come under fire after referring to the United States as a 'terrorist regime' while blasting President Trump for directing the airstrike that killed an Iranian military leader.

AceShowbiz - Rose McGowan is one of those who have condemned the U.S. airstrike in Iran, but her tweet has backfired. The "Charmed" alum blasted President Donald Trump as a "d**khead" in one of her posts while reacting to the attack that killed Major General Qassem Soleimani, the commander of Iran's Quds Force, but it was her remark that compared the United States to terrorist which drew the ire of other Twitter users.

"Dear #Iran, The USA has disrespected your country, your flag, your people. 52% of us humbly apologize," so she wrote on Thursday, January 2. "We want peace with your nation. We are being held hostage by a terrorist regime. We do not know how to escape. Please do not kill us. #Soleimani." 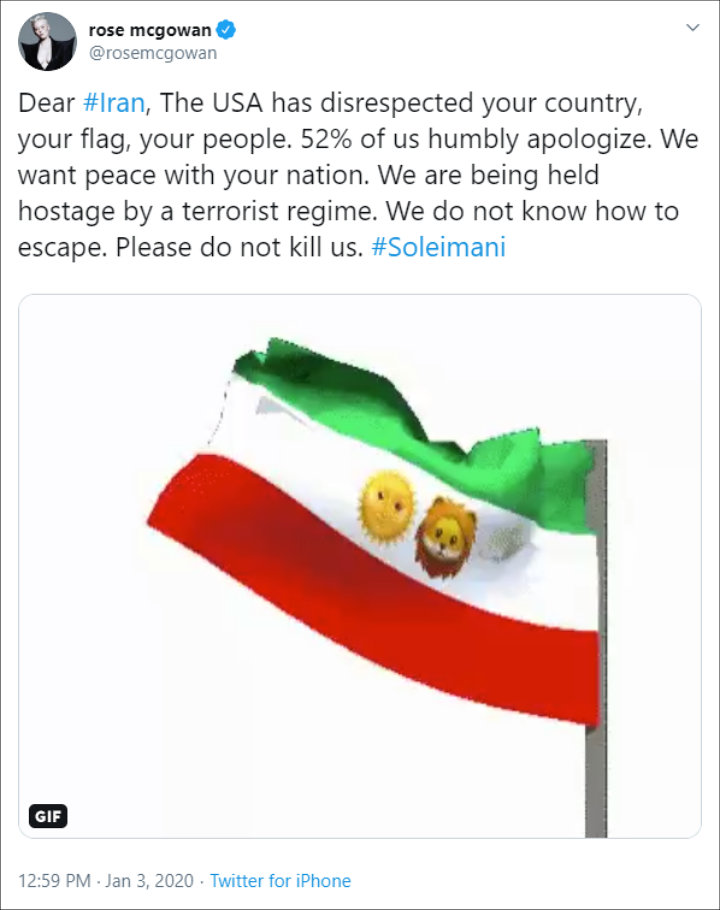 Her controversial tweet quickly earned her some backlash, with one writing, "I did myself a favor and blocked Rose McGowan. I have tried to have sympathy, because she's dealt with some crap. But calling our country a terrorist regime is an insult and a slap in the face to people who truly live like that. Perhaps she should move to Iran."

Another felt that Rose's controversial tweet validated her comment years ago which claimed that "Rose McGowan was a bucket of crazy and not some beacon for female empowerment."

Despite the backlash, the 46-year-old star didn't seem to have any regret about her controversial remark. When one person told her to delete her tweet, she replied, "Eat s**t."

Another told the actress, "You think Iran gives two craps what some girl from Charmed says? You're not taking one for the team. You're betraying the ones killed by terrorists to defend your freedom." Rose hit back as saying, "F**k your freedom and shove it up your #MAGA a**."

Defending her earlier statement, Rose tweeted again, "Of course #Soleimani was an evil evil man who did evil evil things. But that at this moment is not the fucking point. The United States is morally corrupt and acts illegally. It is only logical to appeal to Iran's pride by apologizing. I'm taking one for the team. #TeamStayAlive."

Later, she admitted that she feared the U.S. airstrike would lead to a war. "Ok, so I freaked out because we may have any impending war. Sometimes it's okay to freak out on those in power. It's our right," she confessed. "That is what so many Brave soldiers have fought for. That is democracy. I do not want any more American soldiers killed. That's it."

Rose McGowan Falls Into Depression a Year After Moving to Mexico

Rose McGowan 'So Grateful' After being Granted Permanent Residency in Mexico