The pregnant 'Crazy Ex-Girlfriend' actress reveals that Kate Brogden and Steven Porfiri have invited her and her husband to spend the night with them after she reached out for help on Twitter.

AceShowbiz - Pregnant actress Rachel Bloom has publicly thanked a California couple who offered her a place to stay when she was stranded in a snowstorm over the weekend.

The "Crazy Ex-Girlfriend" star and her husband, Dan Gregor, reached out for help after they were forced to change their travel plans.

"My husband and I are stranded in Bakersfield," Bloom wrote on Twitter on Friday (December 27). "Does... anyone have a place we could sleep? We are stranded here or theoretically north of here (every highway going south is closed) and every hotel that's open is at least a 2 hour drive away and we're about to just sleep in our car." 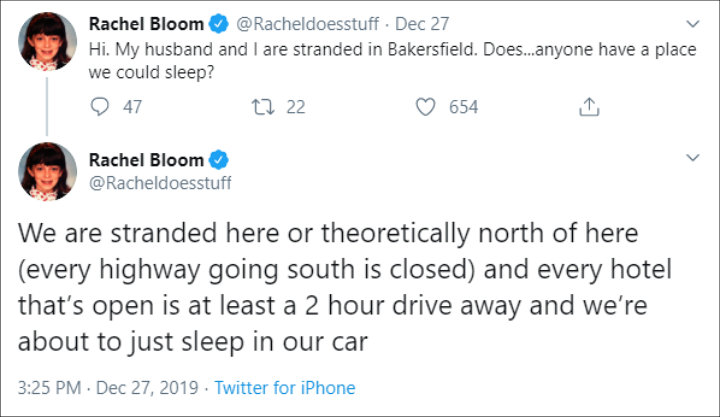 Rachel Bloom turned to Twitter to seek help after being stranded in a snowstorm.

Local couple Kate Brogden and Steven Porfiri responded and invited Bloom and Gregor to spend the night with them.

"Thank you to @katewritesthings, Steve and Steve's entire family," Bloom wrote on Saturday, revealing she felt a bit like Jesus Christ's mum. "You gave shelter to a pregnant lady wandering from inn to inn last night. When my child is born as the inevitable Messiah, you will all be honored with golden steeds and flaming swords."