GZA, Raekwon, Ghostface Killah, U-God and Method Man of the hip-hop group have taken to Instagram to pay tribute to the former member of the Killa Beez collective.

AceShowbiz - Wu-Tang Clan are mourning the loss of their spiritual leader, Popa Wu. Turning to their individual social media accounts on Monday, December 16, members Ghostface Killah, GZA, Method Man and U-God among others paid heartfelt tributes to the cousin of RZA.

Ghostface Killah, whose real name is Dennis Coles, posted a series of his photos with the man who was also known as Freedom Allah. Along with the collection, he wrote, "REST IN PARADISE MY BROTHER @popawu7 FOREVER TELL DIRT WE LOVE AND MISS HIM .. ALL PRAISES DO TO THE MOST HIGH."

Fellow Wu-Tang rapper GZA, in the meantime, posted a short clip of the late 63-year-old with a simple note, "R.I.P. Popa Wu." While Method Man simply noted "No words!" in his Instagram post, Raekwon expressed his grief over the loss. In the caption of Popa's picture, he wrote "Can't believe your gone !!!!!! this hurts."

Also sharing a sad message on Instagram was Inspectah Deck. "Can't sleep... RIP #papawu. I will miss you," he stated. "My condolences to the whole family DAMN. Always love you thank you for all your wisdom." Fellow member Masta Killa additionally posted, "You will always be in our hearts and Never forgotten. Rest in peace GOD. #PAPAWU forever."

Around the same time, another Wu-Tang member made use of his Twitter account to express his sadness. "RIP to the one and only PAPA WU our sincerest condolences go out to the entire family," wrote U-God along with a link to Ghostface Killah's song "Black Jesus" that featured him, Raekwon and Popa Wu. 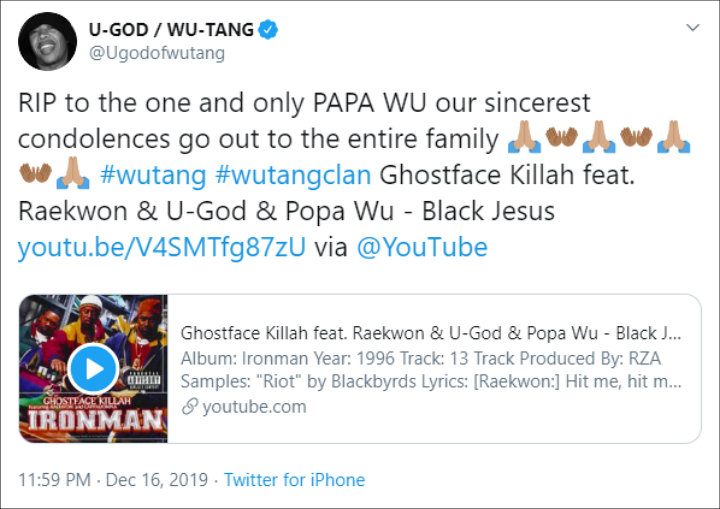 U-God turned to Twitter to express his loss over the death of Popa Wu.

A long time affiliate to Wu-Tang Clan, Popa Wu was also was known for teaching Five Percenter philosophy on the hip hop group's tracks. He passed away at his home in Brooklyn, New York on Monday morning, December 16. Details surrounding his passing have yet to be disclosed.

Wu-Tang Clan and Sharleen Spiteri Bonded Over Their Rebellious Spirit