The 'Lucid Dreams' hitmaker passed away in a Chicago hospital following a flight from California only days after celebrating his birthday with his girlfriend in an anime-themed party.

AceShowbiz - Juice WRLD passed away on Sunday, December 8. The "Lucid Dreams" rapper died at Chicago's Midway airport following a flight from California. According to a report from TMZ, he suffered from a seizure after his plane landed early Sunday morning.

According to witnesses, Juice WRLD had seizure while walking through the airport. He was allegedly bleeding from his mouth when paramedics got on scene. He was still conscious when he was rushed to hospital but later pronounced dead at the hospital.

Juice WRLD, real name was Jarad Anthony Higgins, was 21. He just celebrated his birthday. In his last Instagram post last week, the "All Girls Are the Same" lyricist told his online followers, "Yesterday was my actual bday im celebrating all week doe." On Twitter, he called it "one of the best birthdays ever."

Meanwhile, his girlfriend Ally Lotti tweeted, "b4 this day ends, i just wanna say hbd to my favorite person. this is ur second birthday i spent w yu and im so grateful. yu deserve so much im so proud of you and everything you’ve accomplished this past yr. there is not a soul that could match your energy. ily 'endlessly.' "

She threw a Naruto-themed birthday party for him. "My bday gift 2 j," she tweeted. "If you look hard you can see j is half Naruto and half Sasuke (w the sharingan eyes) to represent him being my best friend and the loml." He responded with an equally sweet note, "It's us forever bb girl." 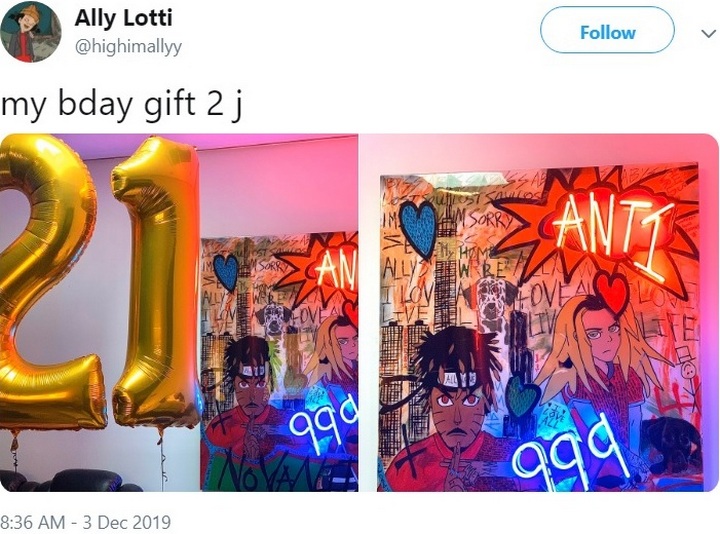 Juice WRLD's girlfriend surprises him with an anime-themed birthday party

The cause of his death is still unclear. Fans and fellow celebrities sent condolences and well wishes on social media. One of his collaborators, Lil Yachty, tweeted, "Wow, I cannot believe this. Rip my brother juice world [crying face emojis]." Yachty additionally posted on Instagram, "Bye brother, love u dawg.. rip."

Another Juice WRLD collaborator, Yung Bans, tweeted, "JUICE AND X S**T AINT RIGHT [brokenheart emoji]." Seezyn who teamed up with the recently deceased star in a "Spider-Man: Into the Spider-Verse" song called "Hide" wrote this, "My heart is completely shattered." DJ Booth penned a similar message, "He was 21. Heartbreaking. RIP, young man."

In a song called "Legends", Juice WRLD seemingly predicted his own demise, "What's the 27 Club? / We ain't making it past 21 / I been going through paranoia / So I always gotta keep a gun / Damn, that's the world we live in now / Yeah, hold on, just hear me out / They tell me I'ma be a legend / I don't want that title now / 'Cause all the legends seem to die out."

Besides Juice WRLD, These Deceased Stars Eerily Predicted Their Own Deaths

Juice WRLD's family Opens Up on His Battle With Drug Addiction