Despite the videos, JayDaYoungan has taken to his Twitter account to deny that someone snatched the chain off his neck during his performance in North Carolina, writing, 'Don't believe the hype.'

AceShowbiz - JayDaYoungan was reportedly to have a not-so-nice experience during his performance in North Carolina at Saturday, November 30. The rising star apparently got into a bit of an altercation as a video emerged over the weekend, featuring someone allegedly snatching his chain.

In a video that circulated online, it appeared that a person was trying to get at him on stage. The rapper was walking down off stage when he was pulled down to the floor by someone who jacked his necklace.

In another clip that emerged shortly after, someone was on FaceTime while flaunting the rapper's chain. "Tell him come get his s**t," the person on the line yelled out. Meanwhile, the man who held the chain then responded, "F**k that n***a, JayDaYoungan, n***a."

Despite the videos, JayDaYoungan denied that someone snatched the chain off his neck. "Don't believe the hype n****s scary af fr , Reach for sum s**t then try to run !" he wrote on Twitter.

The Louisiana rapper went on saying that the person picked the chain from the floor once he left the venue. "DONT even get it but wait til my security pull me out the club my s**t fall & y'all pick it up. H** a** s**t." 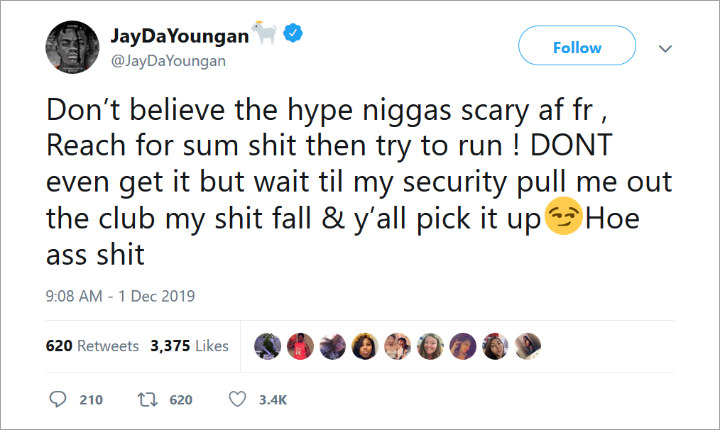 JayDaYoungan denied his chain got snatched by a concertgoer.

He added, "If you don't know facts about a situation don't speak on that s**t...I'm so solid can't s**t faze or break me I'm built for this."

People, however, didn't buy his words. "That ain't what the video showin," said one person replying to JayDaYoungan's tweet. Accusing him of lying, some others wrote, "cappity cap cap." Someone else seemingly wasn't surprise, noting that it was "bound to happen sooner or later he too soft."

That aside, JayDaYoungan is currently promoting his latest project, "Misunderstood", which was released in October. His new album features Lil Durk, YFN Lucci and Boosie BadAzz among others.

The Game's Manager Says Nipsey Hussle Isn't a Legend: It's the Truth

JayDaYoungan Released From Jail After Arrested for Accessory to Murder