The 'Power' actress refers to Notorious B.I.G.'s hit single as she responds to the female rapper slamming her in a new interview over her casting in 2009's Biggie biopic.

AceShowbiz - Naturi Naughton has heard about Lil' Kim taking a swipe at her yet again in a new interview. The female rapper disapproved of the "Power" actress playing her in the 2009 Notorious B.I.G. biopic, claiming that they looked nothing alike. The hip-hop star also called out the actress for allegedly not contacting her following the casting.

Naughton took to her Instagram Story to share her thoughts on Lil' Kim's criticisms. "In the words of #BiggieSmalls…'Mo Money, Mo Problems' [shrug]," so she wrote a short cryptic note without directly mentioning the rapper's name as she referred to Biggie's 1997 posthumous single which discusses the troubles that come with affluence. 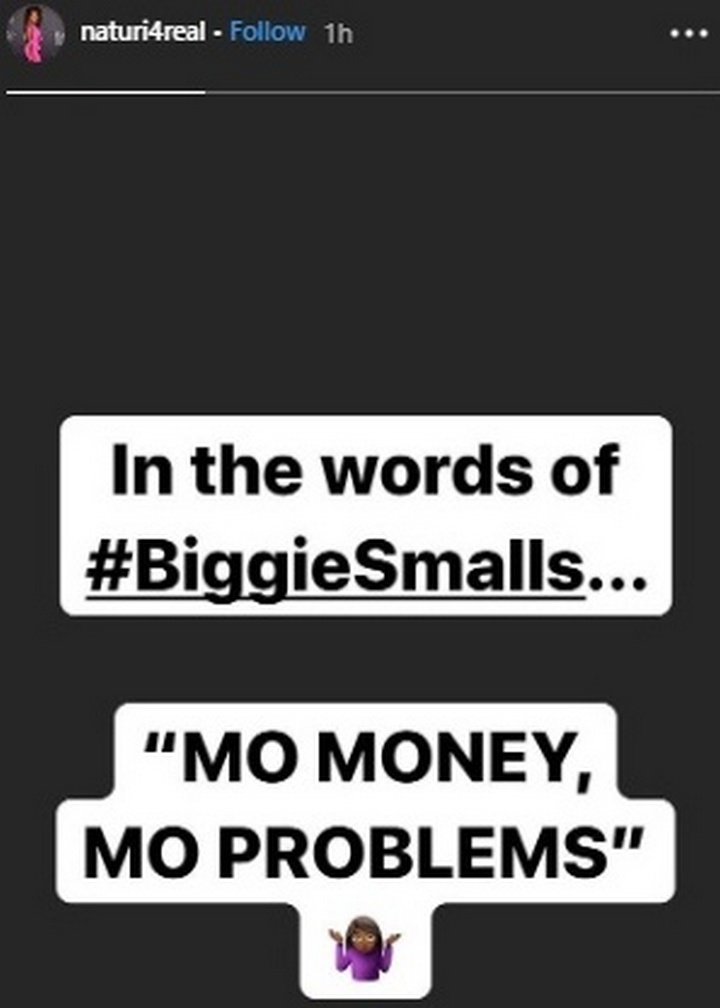 Lil' Kim dissed Naughton numerous times in the past. Back in 2009, the rapper said she wanted Christina Milian to play her. "I wanted to get someone who actually knew me and knew my sexiness and knew my sophistication and who can pull it off," Lil' Kim said. "She could've damn sure played it better than that girl and I know that because Christina is my friend."

She continued to take a jab at Naughton in a different interview, "I would have never picked Naturi. She doesn't have a Lil' Kim aura at all! She looks nothing like I looked back then. We have NO similarities. Watching her on-screen was so 'dreadful' as Simon Cowell would say. She is tasteless and talentless."

Biggie's mother, Voletta Wallace, later hit back at Lil' Kim, "She felt the character we chose for her was too dark… Do you know why the character was too dark for her? Because she's a white woman trapped in a black woman's body, and you can tell the world I said it, because those are Lil' Kim's words. She should be ashamed of herself."

In a 2016 interview, Naughton finally addressed Lil' Kim's criticisms, "All I know is I had the pleasure and honor of playing Lil' Kim in the film 'Notorious'. My thing is, I was a first-time actress in a film, this was the beginning of my career. I was a little black girl from Jersey, why not uplift and support that? I've always appreciated and loved her work and wish her nothing but the best."

Earlier this year on TV One's "Uncensored", she addressed claims that she never contacted Lil' Kim. "I would never take on the role of a real-life person, that is alive and well, and not try and speak with them and reach out. So for the record, for all those interviews or things people have heard where they said, 'Oh, Naturi didn't even try to get in touch with Lil' Kim?' Lies. Lies," she said.

"Let's clear the record. At the time, there was a manager that was managing Kim, I think his name was [Lance] Un [Rivera]. I called, I left multiple voicemails," she revealed. However, the hip-hop star refused to pick up any of the actress' calls. "I reached out via phone and tried that time in person," she added.

"I did my absolute best," Naughton said of her performance in the movie. "I decided, if I'm going to do Lil' Kim, I'm going to murder it. I'm not going to halfway this character." She went on, "I learned everything. I embraced the tone, the style, the swag, Brooklyn; I made sure the best way that I could. I wanted to honor her because she was so dope and I grew up loving the Notorious B.I.G. and Junior Mafia. It was legendary. So I just wanted to do it justice."