Lamar Morales Odom takes to the comment section of his father's Instagram post to express his anger after the professional basketball player proposed to his girlfriend without telling his family beforehand.

AceShowbiz - While many have congratulated Lamar Odom and his new fiancee Sabrina Parr on their engagement, one of his loved ones isn't happy about the news. The reality TV star's son Lamar Morales Odom has taken to social media to slam his father over his sudden betrothal to his girlfriend of four months.

The 17-year-old teen publicly expressed his anger by commenting on Lamar's engagement post. Below a photo of the professional basketball star and Sabrina likely taken immediately after he popped the question, Lamar Jr. wrote, "Not a text or a phone call to see how people who've know this dude his whole life to see how we would feel or react. Knew shawty for 4 months and already got you twisted."

Lamar's son claimed his "Family n friends already don't approve" of Sabrina, whom Lamar Jr. dubbed a "homegirl," adding, "but already she got your a** inna sunken place." He added that the family was disappointed Lamar didn't tell them prior to proposing to Sabrina, "Shame family gotta find out on social media but that's been how life been all the time as the son of an Odom." 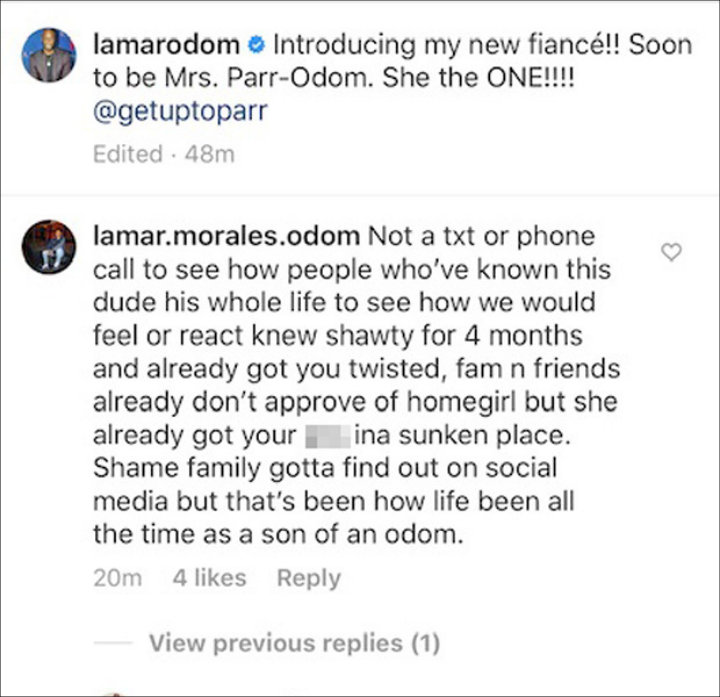 Lamar Odom's son slams his father over sudden engagement to Sabrina Parr in a now-deleted comment.

Lamar Jr.'s comment has since been deleted, but he has not addressed why he wrote such statement about his father's fiancee and their engagement.

Lamar and Sabrina announced their engagement on late Monday, November 11. "Introducing my new fiance!! Soon to be Mrs. Parr-Odom. She the ONE!!!! @getuptoparr," the 40-year-old athlete wrote along with their picture at Prime 112, a high-end steakhouse. The life coach put her hand on his chest, showing off her engagement ring.

Sabrina took to her own social media account to give closer looks at her new sparkler. The ring features a huge pear-shaped diamond surrounded by smaller stones set on platinum band. "I SAID YES!!!!! @lamarodom #mrsparrodom #lamarandsabrina," she wrote in the caption, adding a ring and a bride emoji.

Lamar Jr. is one of three children whom the basketball player shares with his ex Liza Morales. They also had daughter Destiny and son Jayden. However, Jayden died at six-and-a-half months old on June 29, 2006 from sudden infant death syndrome while sleeping in his crib in New York.

This Is Why Lamar Odom and Sabrina Parr Stop Having Sex