Fans in the replies apparently agree with her as one notes, 'Everyone has said stuff behind the others back, to their 'hw friend' or in their blogs. Why is Camille the only one called out for it?'

AceShowbiz - Now that she won't be returning for the new season of "The Real Housewives of Beverly Hills, it seems Camille Grammer isn't holding back while talking about the show. In her recent tweet, the 51-year-old hinted Kyle Richards was not the only factor she wasn't called back for season 10.

Camille took to the blue bird app to imply that host/executive producer was one of the people to be blamed for her situation. "I still don't why Andy is forcing this two-faced narrative on me," she wrote on Wednesday, September 18. "I told Teddi [Mellencamp] to her face what I said to Denise [Richards]. What the heck? I gotta laugh I was ask to tell Denise what happened after the Boy George concert, so I explained." 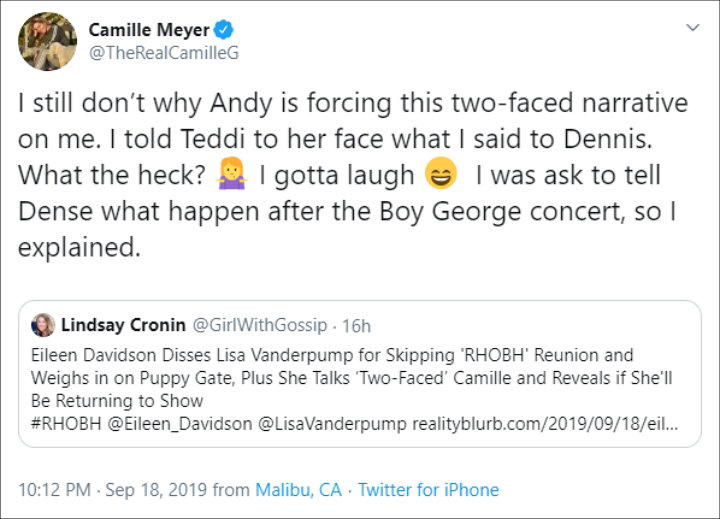 Camille Grammerclaimed that Andy Cohen tried to make her look like a 'two-faced' person.

Fans in the replies apparently agreed with her as one said, "Does anyone watch the confessionals. Everyone has said stuff behind the others back, to their 'hw friend' or in their blogs. Why is Camille the only one called out for it? Because, she speaks her mind. She didn't fall in line with Kyle's plan." Another fan noted, "Because @Andy is Kyle's b***h. All the housewives talk behind each other's backs, especially his bestie Vyle Kyle, but he only called you out."

Prior to this, Camille alluded that she wouldn't be returning because Kyle didn't want her to. "I wasn't asked back. It's fine. I did my time on the show," she explained at the time.

She continued. "And it's Kyles show. It was was [sic] up to Kyle. I'm really fine. After the reunion, I didn't want to come back. It was an awful experience." She was referring to the drama-filled reunion special in which she had a backstage outburst with Andy as she felt that she had been set up by a number of the Housewives.

Kyle, meanwhile, thought Camille was being too dramatic with her reaction. "Camille came into the Reunion guns blazing. I honestly do not know why she was so angry. We of course are going to address the stuff she said and did. That's what the Reunion is about," she tweeted in June.

Kyle Richards on Upcoming Season 10 of 'RHOBH': 'They Do Break the Fourth Wall'