The 'Bartier Cardi' raptress takes a shot at the 'Hot Girl Summer' hitmaker by liking an Instagram post questioning the latter's education after she misspelled the word 'compliment.'

AceShowbiz - Cardi B isn't trying to play nice with Megan Thee Stallion, who has collaborated with Cardi's nemesis Nicki Minaj on the hit summer anthem "Hot Girl Summer". While the younger rapper has been trying to keep it civil with the "Bodak Yellow" hitmaker by offering a collaboration with Offset's wife, the 26-year-old star has taken a jab at Megan.

The drama started as one of Cardi's fan pages threw shade at Megan for misspelling the word "compliment." The fan page reposted Megan's Instagram Stories post, in which she wrote, "I like it when y'all complement my make up," along with a busty picture of her.

The fan page pointed out Megan's mistake in the caption, "It's compliment*^ Is this y'all's college scholar you n***as brag about?" The page's administrator referred to Megan's claim that she's currently enrolled in Texas Southern University as a junior.

Cardi didn't add any comment, but she liked the post and that's enough for everyone to start talking about the supposed bad blood between the two rappers. 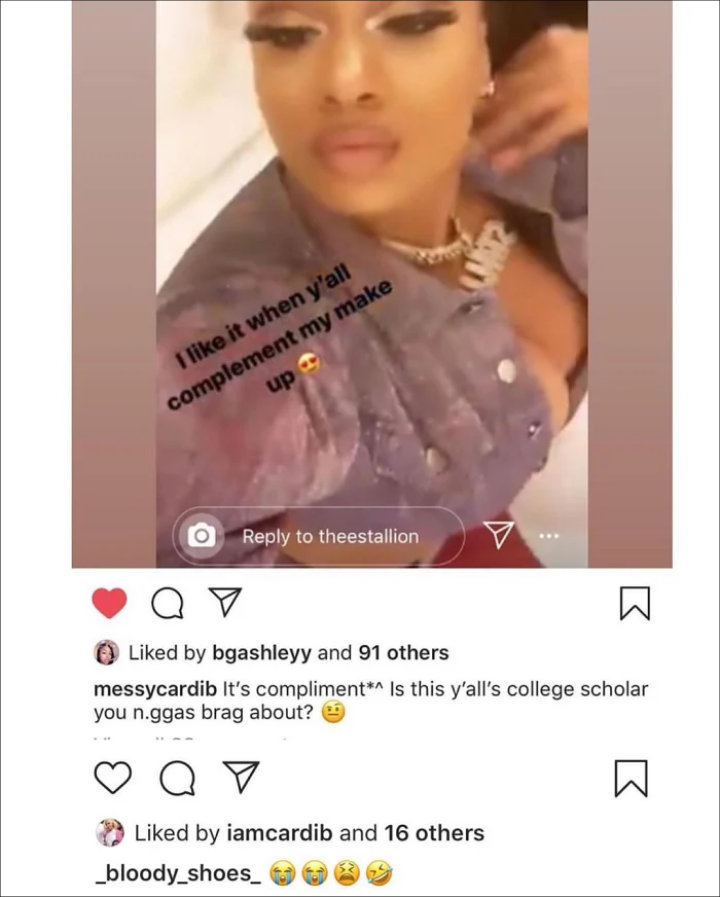 Megan has claimed that she's studying health administration in the university, but many have doubted it. Some people think that it's just a PR stunt. Some others believe that Megan dropped out of college last semester, when her career took off.

Cardi previously held herself back from causing a major drama with her rival Nicki and Megan. Back in July, she called out an impostor who faked a Twitter account and used it to make it as if the Bronx femcee liked a post that shaded Megan.

Cardi then took to her official account to deny that she ever weighed in on Nicki and Megan's interaction on Instagram and blast the impostor. "F***in weirdos," she posted along with a tweet from her fan pointing out the difference between Cardi's original account with the fake one.