AceShowbiz - Cardi B is steering herself clear of any drama with Nicki Minaj and Megan Thee Stallion as the latter two female rappers recently put up a united front on social media. Refusing to be dragged into yet another feud with her mortal nemesis Nicki, the "Bodak Yellow" hitmaker exposed an imposter who tried to ignite beef with the "Starships" raptress and Megan.

On Saturday night, July 27, Nicki and Megan had a joint Instagram Live session, during which they sang praise for each other. "Stop playing with Nicki Minaj like she ain't the muthaf***in' GOAT, like she ain't that b***h," Megan gushed while Nicki also appeared on the split screen. "Thank you, Megan," Nicki responded, adding, "I already know the vibes on another level."

Following the Instagram Live session, someone claimed Cardi liked her comment, which was a shade on Megan, and then unliked it. Strangely, the said Twitter user notified Megan, whom she supposedly also disliked, about Cardi's alleged Twitter activity.

While some people were prepared for another round of feud between female rappers, a fan of Cardi quickly pointed out that the Twitter account which liked the shade is fake. "Y'all really believing in some fake dumb s**t I can't," the said fan wrote along with a screenshot of the fake account.

Cardi then took to her official account to deny that she ever weighed in on Nicki and Megan's recent interaction on Instagram and blast the imposter. "F***in weirdos," she posted along with the original tweet from her fan. 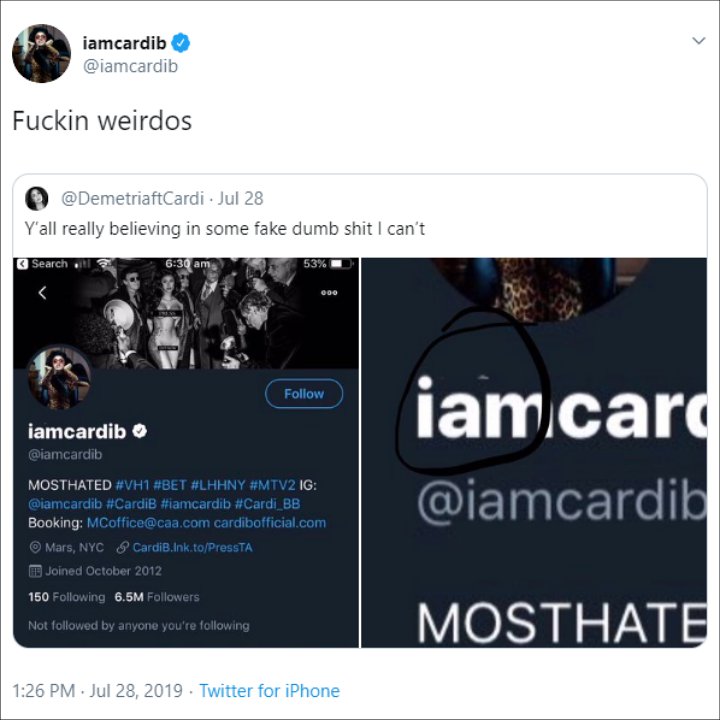 While some were still not aware of what had happened earlier, someone explained to Cardi's fans, "The person is highlighting out someone screenshotted Cardi but created fake account to make it seem like it's her. In the circle u can see a slight mark where they forgot to completely cover up their name."

Cardi and Nicki were previously involved in a brawl at a Harper's Bazaar after-party. The Bronx femcee allegedly threw one of her shoes at the "Anaconda" hitmakter during the bash in September 2018.

Earlier this year, someone tried to reignite the feud between the two female stars by posting a fake comment which seemed to be from Cardi's Instagram account. "AINT THREATEN BY NOBODY WHAT DON'T YALL GET??? I JUST WON 6 AWARDS TONIGHT AN YA FABES WIN NOTHING!!!" the post read. "TELL NICKI TO COME OUT OF HIDING INSTEAD OF WORRYING ABOUT ME."

The "Bodak Yellow" hitmaker denied that the comment was from her, writing on Twitter, "This is fake ass f**k! This is why I post it what I post yesterday on Twitter because ya constantly make fake s**t up and try to put me against people all the f***ing time! Please get a f***ing life. I had an amazing fun night last night for me to do bulls**t!"

Cardi B Says Her Illness Is Not Coronavirus-Related