Though freaking out over her online faux pas, the 'Lip Sync Battle' co-host gives one lucky fan a treat by answering to his call before enjoying dinner with her mother.

AceShowbiz - Chrissy Teigen was inundated with FaceTime calls from strangers on Tuesday night (September 17), after she accidentally shared her email address online.

The 33-year-old presenter took to Twitter to reveal her faux pas, telling fans: "F**k I posted my email address lmao (laugh my a*s off)." Her error led to many eager fans trying to FaceTime her using the email address, with Chrissy deciding to answer one lucky follower's call.

"oh my god people are FaceTiming me. was 100 per cent sure this would be a penis but nope just a nice stranger," she added.

In the video, shared on her Twitter page, Chrissy was sitting by her mother Vilailuck on her laptop as she chatted to the man, who introduced himself as Ricardo.

"Hi, Ricardo, nice to meet you. This is my mom," Chrissy laughed. "Thanks for calling me!".

When Ricardo asked Chrissy and Vilailuck how they were doing, the mother-of-two answered: "We're good, we're about to eat dinner but just thought we'd answer one of these."

Ahead of signing off, Chrissy told Ricardo: "(It was) nice to meet you!". 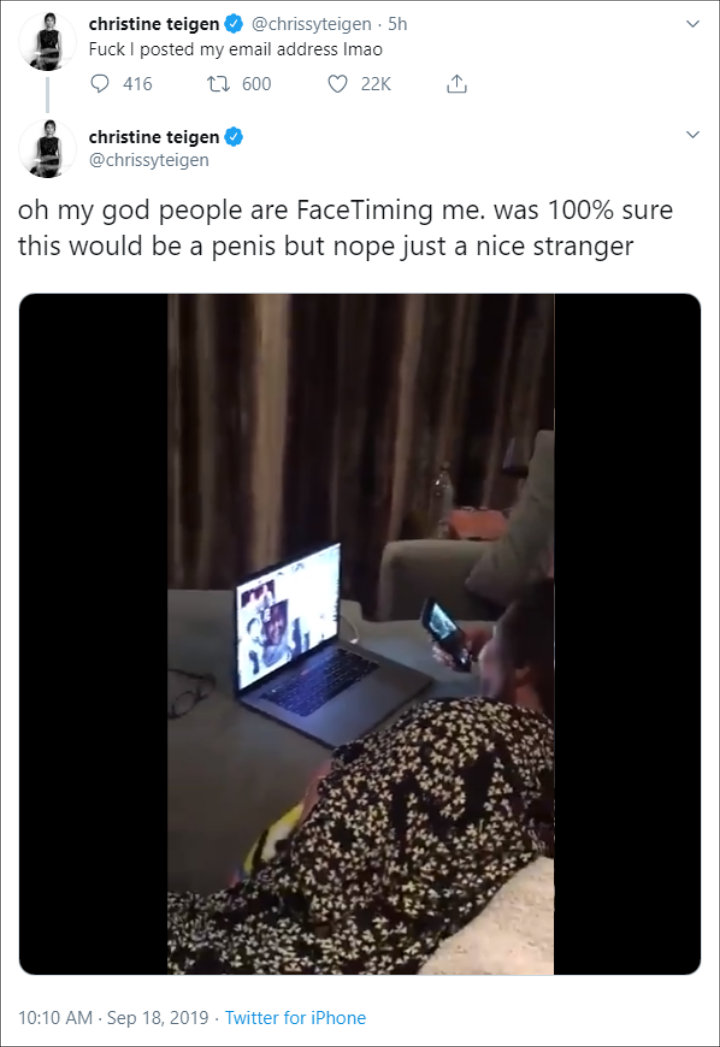 Chrissy Teigen FaceTimed one of her fans.

The "Lip Sync Battle" host later added that she had made the decision to change her email address and disable FaceTime because the calls were still coming thick and fast.

"Everything disabled and changed emails. but I love you guys and thank you for the kind words lol," she tweeted.

It's not the first time Chrissy has accidentally shared personal information. When one of her followers asked how celebrities handle incidents like that, she replied: "Not as bad as when I published my phone number on my dog's collar in my cookbook."

Britney Spears' Father Off the Hook From Child Abuse Allegations