The 'Happy Little Pill' singer finds himself in an awkward spot during an interview for a profile in LGBTQ magazine Express when the reporter asks him whether he's a 'top or bottom.'

AceShowbiz - Troye Sivan has taken to Twitter to call out a journalist who asked him whether he's a "top or bottom".

The openly gay star, 24, was the subject of a Q&A profile in New Zealand's LGBTQ magazine Express. But things took an unexpected turn when the interviewer asked the "My My My!" hitmaker a series of "strange" questions - including whether he's active or passive in the bedroom.

The musician, who has been in a relationship with model Jacob Bixenman since 2016, was also asked about his crush on Shawn Mendes, who publicly identifies as straight, and whether or not things got "steamy" when they met.

And taking to Twitter on Wednesday (August 28), Troye took aim at the journalist over the "wildly invasive" interview.

"I thought about asking the interviewer about his absolute fave sex position after that last question, but then I remembered how wildly invasive, strange and inappropriate that would be. Didn't stop him though!," he shared. 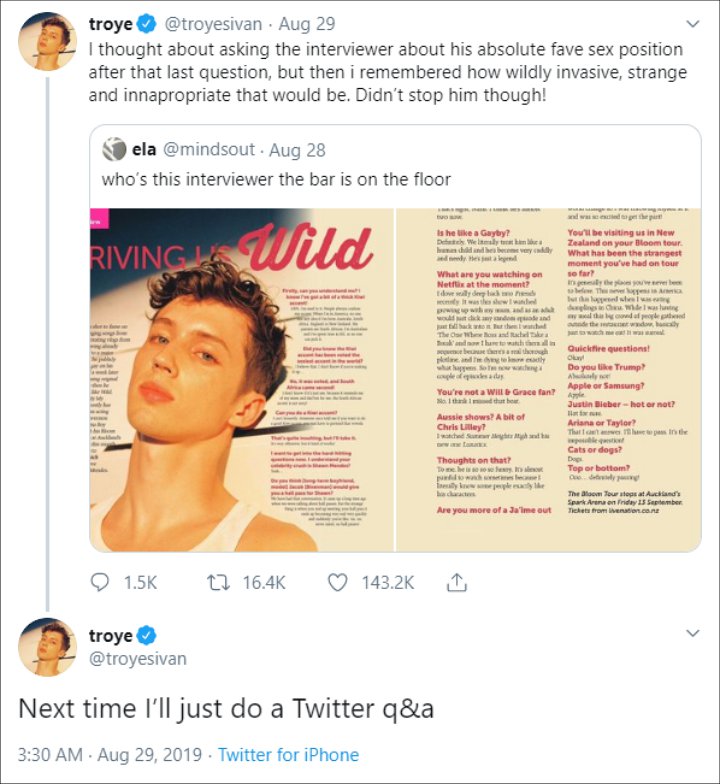 Troye Sivan took a jab at a reporter.

Making light of the experience in a separate post, the star went on to quip he'd "just do a Twitter Q&A next time".