The 'Amazing Spider-Man 2' actor is seen leaving Bootsy Bellows nightclub in Los Angeles hand-in-hand with the brunette beauty, before whisking away in his car.

AceShowbiz - Jamie Foxx continues to spend his time with other women when Katie Holmes is nowhere around him. The 51-year-old actor/rapper was spotted leaving Bootsy Bellows nightclub in Los Angeles with up-and-coming singer Sela Vave on Friday night, August 16.

The "Django Unchained" star and the brunette beauty reportedly attended Lil Pump's 19th birthday celebration at the West Hollywood nightclub. They were pictured leaving the celebrity hotspot hand-in-hand at around 2 A.M.

In some pictures which have circulated online, Jamie was seen helping Sela navigate her way among the crowd and paparazzi before she entered his white car. They reportedly left together in his Lamborghini SUV.

Jamie kept it casual in a white Balenciaga hoodie and black ripped pants, teamed with a black cap and white sneakers. Meanwhile, Sela wore a metallic mini dress that flaunted her legs and cleavage. 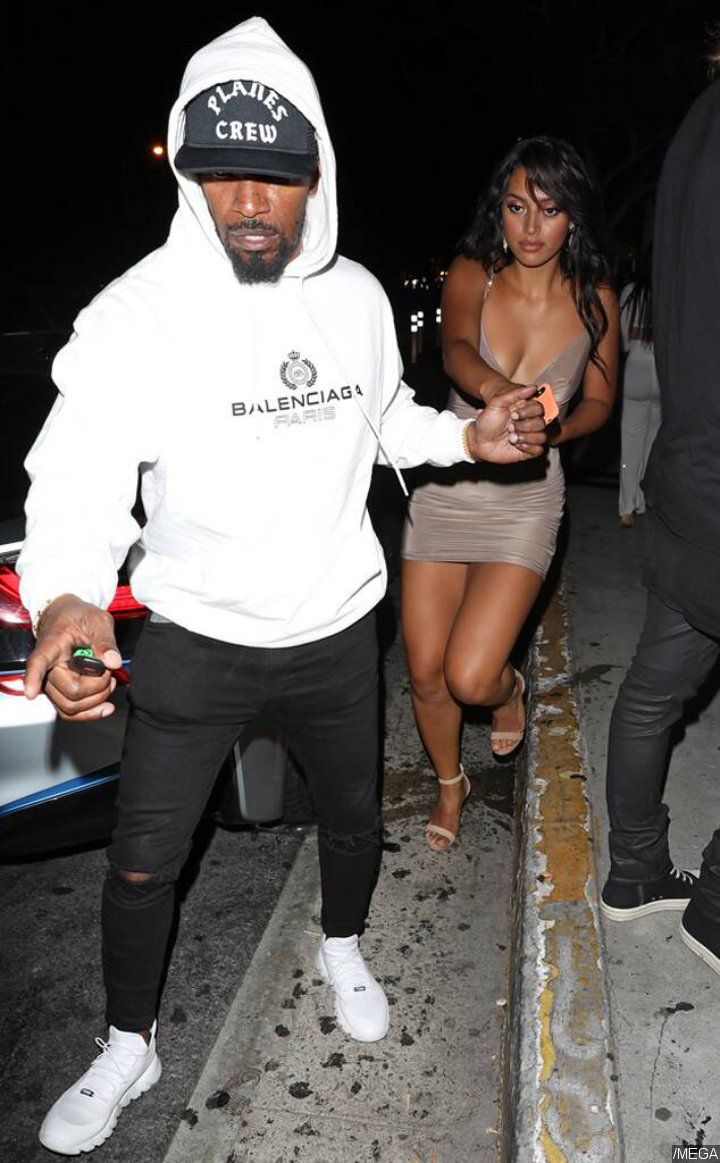 Sela took to Instagram Stories on Friday night to capture their night out at Lil Pump's birthday party. Meanwhile, Jamie went Instagram Live on Saturday, showing him, Sela and some male friends on board a boat.

According to PEOPLE, Sela is the "record producer's newest artist, and he is helping her out on the music side." A source tells the site, "She's just a girl he's helping out, a young singer."

In fact, Sela has been sharing her photos with Jamie on various occasions. "I am so grateful to this man! Thank you so much @iamjamiefoxx for everything you do and for believing in me. #feelingblessed," she captioned black-and-white pictures with the "Baby Driver" actor posted in July.

In another Instagram post, the recording artist/songwriter and model was seen partying with Jamie in the Hamptons earlier this month.

Just a day before he's pictured with Sela in L.A., Jamie was reportedly spending a night with a mystery blonde. According to MTO News, "The Amazing Spider-Man 2" actor and his female companion met up at the Los Angeles restaurant, Catch, before visiting Delilahs in West Hollywood and the Highlight Room. They later allegedly checked into Dream Hotel.

Meanwhile, Jamie's longtime rumored girlfriend Katie Holmes was spotted out and about alone in New York City on Saturday. She appeared to be in good spirits, smiling to someone she saw as she strolled the streets solo.

There's no word on whether the pair, who were first rumored dating in 2013, have broken up or not.

'RHOBH': Kyle Richards Reportedly Hopeful She Can Bring Back Lisa Vanderpump to the Show