The YouTube star revealed on Twitter that she and the 'Aaron's Party' singer 'hooked up' at his house just one day after his split with Lina Valentina on August 4, though the singer denied vehemently.

AceShowbiz - It's just a few days after Aaron Carter revealed he split from girlfriend Lina Valentina, and the singer has just made a big revelation on Twitter. Despite previously saying that news about him bisexual was "a little misconstrued," the pop star recently came out as bisexual.

"I want to make something else clear I know there's been a lot of questions about my sexuality and yes I am a bisexual men I date women but I am also attracted to men so please respect that too thank you," he wrote on Thursday, August 8.

Fans in the replies were fully supportive of him and his sexual preference. "Dude it's your life your choice and your buisness and people should respect that since we are in 2019 dude f***ing people shouldn't judge because of sexuality or anything for that matter !! sexuality doesn't define a person character and personality and respect is what does," one fan wrote. Meanwhile, another person simply said, "We stan a Bisexual King."

In related news, Aaron was involved with YouTube star Trisha Paytas after she took to her Twitter account to claim that they "hooked up" just one day after his split with Lina Valentina on August 4. "I hooked up with @aaroncarter 2 nights ago and all I got was an unfollow," she tweeted on Wednesday, August 7. "I'm sorry ur d**k is too big for me to take."

Trisha Paytas claimed that she and Aaron Carter 'hooked up.'

Trisha also detailed her story in an Instagram video which saw her rambling under influences. She started off by alluding that she and Aaron shared a lot of things in common which made them relate to each other. She later revealed that Aaron unfollowed her after they "casually hooked."

"He unfollowed me! What is up with that?" she yelled at the camera. "I'm a little hurt by that. I'm a little offended by that," she admitted, before adding, "What did I do? I was trying to be.. I was being cool. I was like, 'Congratulations on your success, on your house!' We chilled, we hung out.. Like, we were cool. What the f**k happened bro?"

Aaron later responded to Trisha's accusations, bringing his own receipts. He exposed their Twitter DMs which was the YouTuber asking him for a potential YouTube collab in 2016. Aaron responded to it in June 2017, calling her "absolutely gorgeous." The DMs showed them having a nice conversation with Aaron giving her his phone number.

"Trisha just stop. Come on girl you're better then this n have some respect. I get what you're doing with your life/career but it's gotta change at some point in your life. Let's be real," he captioned the photos. 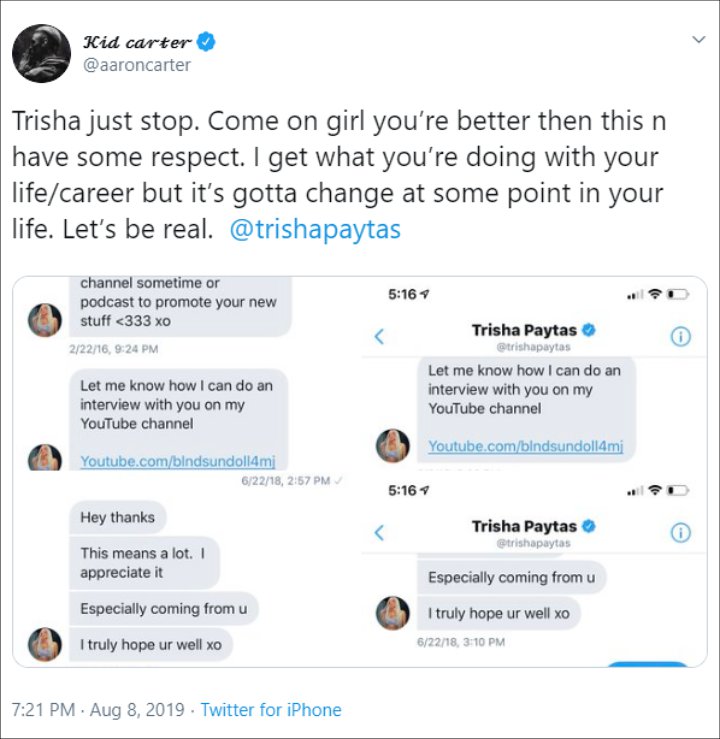 In response to that, Trisha fired back with her own receipts. She posted a screenshot photo of their Instagram DM in which Aaron confirmed that they did hook up when he was still with Lina. "U really gon expose DMs ? Ok here we go - why u f***ing someone when ur girlfriend lives at ur house ! !??? But u try to tell me she's not??! U told me u were single wtf."

Trisha clapped back with her own receipts.

The "Quentin Tarantino" singer was not backing down. He wrote in a now-deleted tweet, "This is foul. To take everyone's personal experiences that they have with you and exploit them for money is appalling. SHAME ON YOU TRISHA THAT WAS MY LAST ATTEMPT AT BEING COOL WOTH YOU. BE WELL...."

Aaron recently got a welfare check at Aaron's Lancaster, California home after a caller sounded the alert, concerned about comments Aaron was making following his recent break-up with artist Lina Valentina. Police officials left when they finally tracked down the "I Want Candy" singer and determined he was OK.

Fans Defend Ariana Grande After Internet Cancels Her Because of This