After fans criticized the 'Hotel Mumbai' actor for sharing the eyebrow-raising video, Elizabeth Chambers comes forward to assure that their children's safety and well-being are their priority.

AceShowbiz - Armie Hammer has upset his Twitter followers after sharing video of his two-year-old son sucking the actor's toes.

"The Man From U.N.C.L.E." star posted what he thought was a cute video on his Instagram Stories on Saturday (July 27), revealing young Ford spent "a solid 7 minutes" sucking away.

But many followers didn't approve of the video and their objections prompted Armie to take the footage down on Sunday.

One fan wrote, "Armie Hammer not only let his son suck on his toes, but he also took a video of it AND posted it on Instagram...?" while another added, "Would like to unsee this."

Hammer's wife, Elizabeth Chambers, responded to the backlash on Sunday afternoon, stating, "It wasn't seven minutes... more like five seconds... Our son likes to play with people's feet and I put the video on our family stream because this phase is an ongoing joke."

"Sharing the video on Instagram was def not the best move on A's part. But I can assure you that our children's safety and well-being is always our first priority." 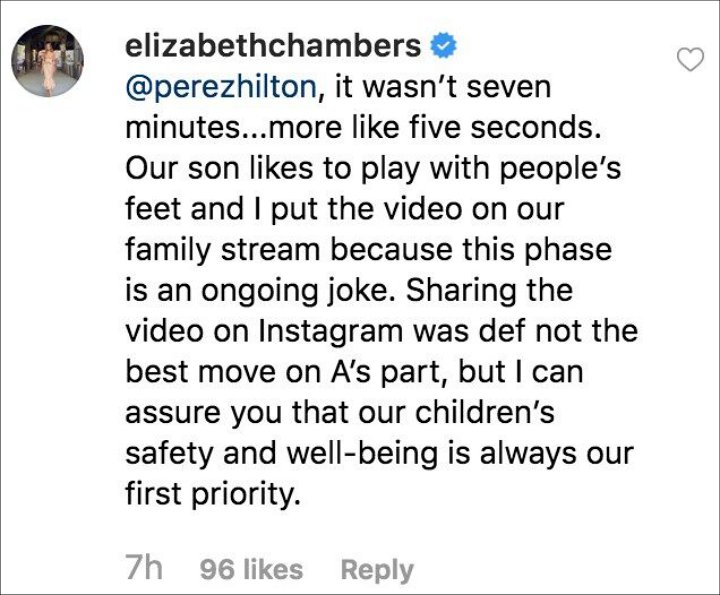 It's not the first time Hammer has sparked controversy with his social media remarks - in November (18), he was hammered after criticising fans and fellow celebrities for sharing selfies with Stan Lee following the Marvel icon's death.

"So touched by all of the celebrities posting pictures of themselves with Stan Lee," he tweeted. "No better way to commemorate an absolute legend than putting up a picture of yourself."

Hammer later issued an apology, stating, "While attempting to provide some unnecessary social commentary about the current selfie trend, I (in true a**hat form - thank you Jeffrey Dean Morgan) I inadvertently offended many who were genuinely grieving the loss of a true icon. I want to apologize from the bottom of my heart and will be working on my Twitter impulse control."

"The Walking Dead" star Morgan was among the stars who took aim at Hammer over his tweet, writing, "Looks like you found a way to use others ways of mourning and their memories to draw some attention to yourself. You sound like a real a**hat."

Both tweets were quickly deleted.

Armie Hammer Gives Himself Mohawk Haircut While in COVID-19 Quarantine