Governor Ricardo Rossello has sparked outcry for his resignation after offensive comments he made over Ricky Martin and New York politician Melissa Mark-Viverito in a private group chat leaked.

AceShowbiz - Reggaeton star Bad Bunny has paused his European tour to join protests in his native Puerto Rico aimed at ousting its governor.

The comments have sparked protests on the island, which was badly hit by hurricanes in 2017, ones Bad Bunny, real name Benito Ocasio, is planning to drop everything to join.

In an Instagram video, he announced he would be leaving Ibiza, Spain, where he has been part of a residency featuring Latin acts, to return to Puerto Rico, and invited others to join protests starting at 5 pm local time on Wednesday.

"I want to pay my respects to all the people who have always had the bravery, courage and initiative to go out into the streets and fight for the sake of our country," the 25-year-old said.

Fellow Latin artist Residente is expected to join the march, and Ricky Martin has called on the governor to resign due to his insulting remarks, in which he wrote: "Nothing says patriarchal oppression like Ricky Martin. He is such a male chauvinist that he f**ks men because women don't measure up."

"Hamilton" creator Lin-Manuel Miranda, who is also of Puerto Rican heritage, has also criticised the governor's administration over the scandal. 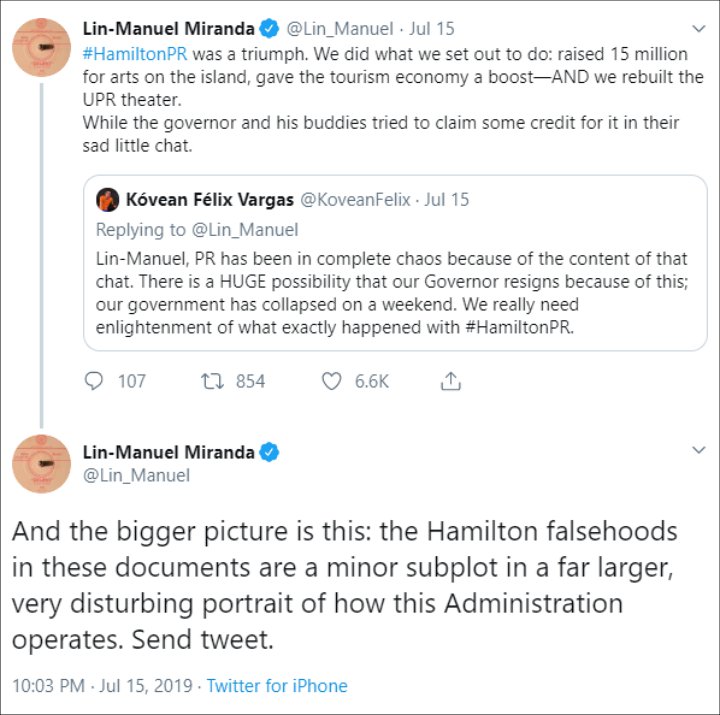 Lin-Manuel Miranda voiced his criticism towards the governor over his insulting remarks.

Two officials have already resigned over the scandal, sparked by the publication of more than 800 pages of text chats from the encrypted messaging app Telegram. Governor Rossello is refusing to step down however, despite apologising for his conduct.

Bad Bunny was due to perform two gigs in the Canary Islands later this week, as well as at Barcelona's Sonar festival, dates that are now in doubt.

Future Is 'Proud' of Catalog Deal Despite Backlash

Florence Welch Keeps 'Bloody Severed Hand' Thrown at Her During Concert, Jokes She Will Eat It Later

David Archuleta Lets Loose in 'Faith in Me' Music Video