One devotee points out the K-pop boy band's status as UN representatives should be good enough reason for them not to push forward with the stop in their 'Love Yourself: Speak Yourself' tour.

AceShowbiz - K-pop boy band BTS (Bangtan Boys) have become the latest musicians caught up in controversy after booking a show in Saudi Arabia.

The Korean group has announced plans to perform at the 70,000-capacity King Fahd International Stadium in October, as part of the "Love Yourself: Speak Yourself" tour, and some fans are far from happy.

Devotees have slammed the group, suggesting Saudi Arabia's poor record on human rights should be enough to make the boys rethink their plans.

One fan, @HoriyaOsman, tweeted: "This is such a bad business move this is really a big f**k you Saudi women, lgbtq fans but also to Muslim fans especially what happening in Yemen... doesn't this contradict their (BTS) message? Of love yourself??".

She added: "Artists have been boycotting Saudi Arabia due to flagrant human rights abuses against women activists and the LGBTQ+ community. BTS are UN representatives and everyone involved here should have known better." 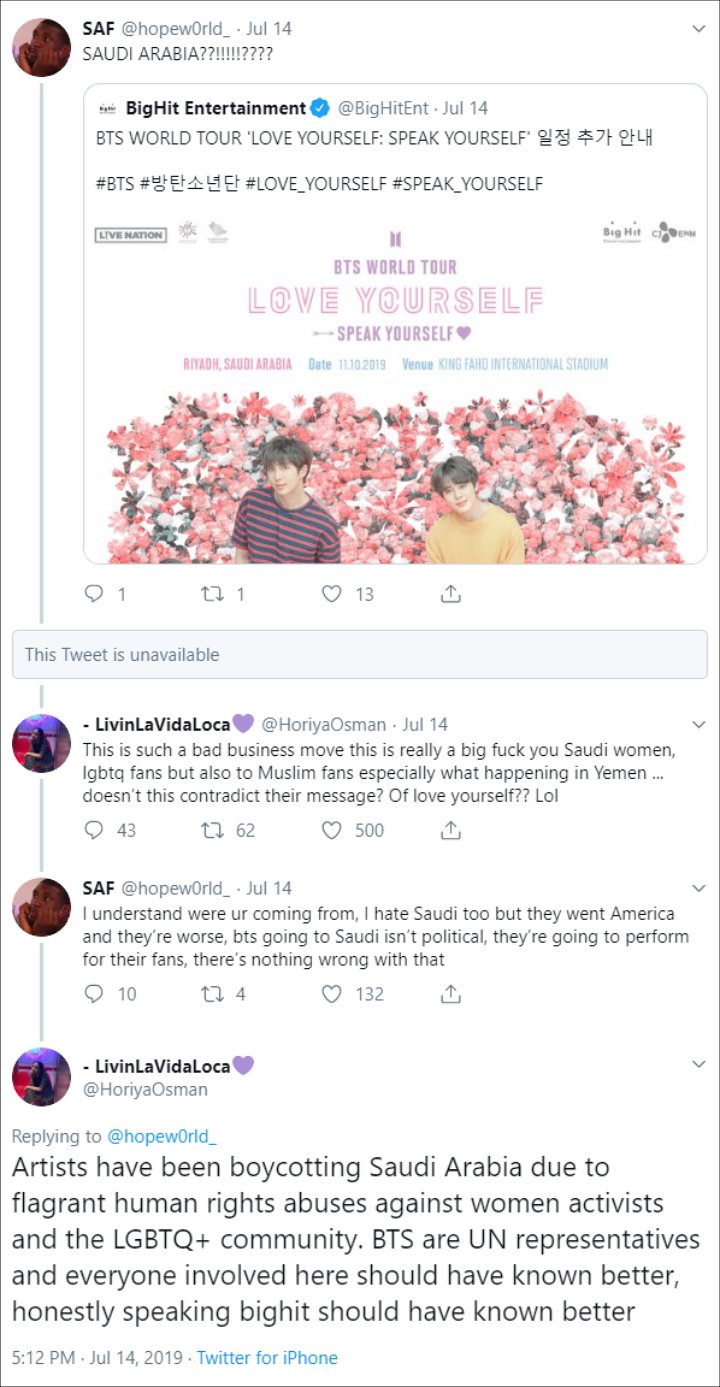 A fan argued that the plan to have a concert in Saudi Arabia was 'a bad business.'

Nicki Minaj recently cancelled her appearance at the Jeddah World Fest in Saudi Arabia after receiving backlash from human rights activists. Officials at the Human Rights Foundation asked Minaj to withdraw from the festival, citing the nation's treatment of women and minorities.

In a statement to the Associated Press, Minaj said: "After careful reflection I have decided to no longer move forward with my scheduled concert at Jeddah World Fest. While I want nothing more than to bring my show to fans in Saudi Arabia, after better educating myself on the issues, I believe it is important for me to make clear my support for the rights of women, the LGBTQ community and freedom of expression," Minaj said.

Jordan Davis 'Blessed' Wife Is Pregnant With Their First Child