Aside from thanking the 'Old Town Road' hitmaker for rocking the London stage with her, the 'Press' rapper turns to social media to ask for the return of the wig she threw into the crowd.

AceShowbiz - Cardi B stunned the crowd as she brought out Lil Nas X during her headline set at Wireless Festival.

The Grammy winner rocked the stage on the first night of the festival at London's Finsbury Park on Friday (July 05), and treated her fans to a set which included her hits "Bodak Yellow", "I Like It" and "Press".

Taking to Twitter after the gig, she heaped praise on the rapper, who recently came out as gay.

"I'm going to bed I have such S bad headache .I want to thank @LilNasX for coming out tonight at Wireless ! It was lit keep doing your thing ,the stars is the limit …..Stream rodeo for a date with lil nas," she shared. 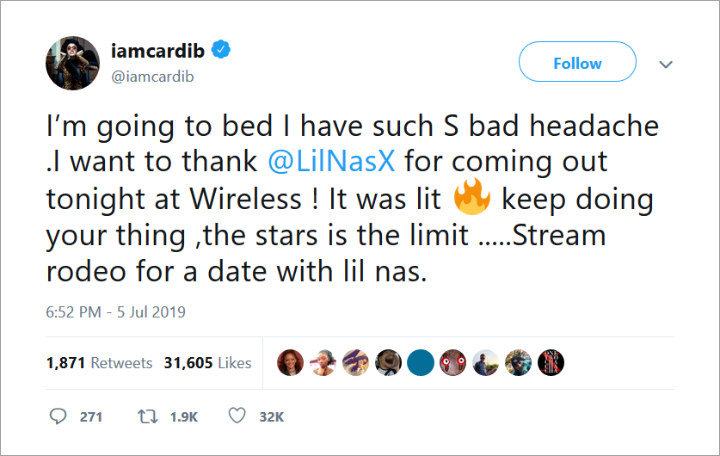 Cardi B thanked Lil Nas X for the 'lit' performance.

The mother-of-one also asked fans to return her wig after she threw it into the crowd during her exuberant set.

Video taken from the gig shows Cardi kneeling on the stage before ripping her wig off mid-song and throwing it into the audience, leaving people scrambling and fighting to grab the souvenir.

Fans advised the New York rapper to check the auction site eBay to see if it was being sold.

A$AP Rocky was due to take to the stage on Sunday, but his set is in doubt after he was arrested and detained in Sweden on assault charges.

Paul McCartney: I Cried A Lot After Linda Passed Away From Breast Cancer

slowthai and The 1975 Collect Multiple Nominations at 2020 NME Awards