The 'Drop It Like It's Hot' hitmaker has incurred the wrath of the former England player's fans after he used side-by-side comparison photos of the latter to discourage others from abusing alcohol.

The 47-year-old sparked backlash when he shared two side-by-side snaps of the ex England player on Wednesday, June 26 - a fresh-faced photograph of him aged 20, and a shocking picture of him at 47 - with the caption: "Alcohol abuse".

In the same post, the "Signs" hitmaker shared a set of pictures entitled "Marijuana abuse", which showed pictures of the rapper at the same ages, hardly looking any different.

The former midfield player has had a well-documented battle with alcohol addiction, drugs and mental health. And while it is not known whether Snoop - real name Calvin Cordozar Broadus, Jr. - is aware of the 52-year-old's troubles, fans slammed the star as a "disgrace" and a "bully".

"No-one disrespects Gazza and gets away with it," wrote one user, while another commented, "Snoop Dogg is cancelled after going after Gazza like that."

A fan decided to 'cancel' the rapper.

A fan blasted Snoop Dogg, accusing him of disrespecting Paul. 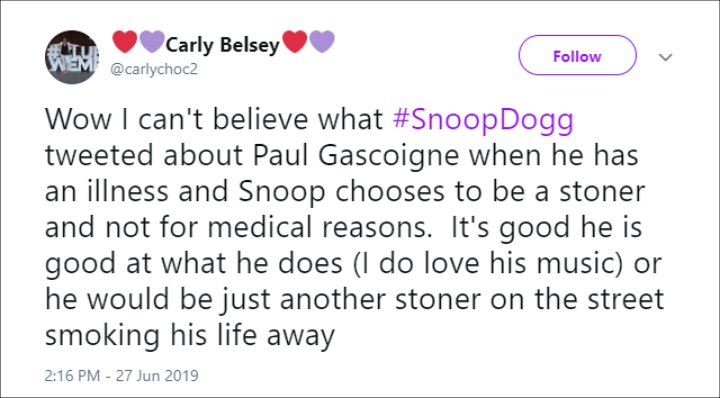 A fourth fan posted: "Wow I can't believe what #SnoopDogg tweeted about Paul Gascoigne when he has an illness and Snoop chooses to be a stoner and not for medical reasons."

Carrie Underwood Opens Up About Mourning Children She Lost in Miscarriages