The 'Sally Walker' rapper is met with a flood of complaints from her fans after she shares an artwork for her new album 'In My Defense' that sees her slumping against a car with blood behind her head.

AceShowbiz - Iggy Azalea has defended the blood-spattered cover for her new album "In My Defense", after many of her fans labelled it "sickening".

The Australian star took to her social media pages on Monday, June 24 to share the controversial artwork, which shows the rapper slumped against a car, apparently dead, with blood behind her head.

After posting the image, Iggy was flooded with messages from her followers, many of whom argued it was unnecessarily graphic.

"Please don't hate me but I don't like it, you look dead," one user wrote, while another added, "Wait but this is sickening".

Addressing the criticism, Iggy responded that she'd been trying to make a statement with the cover, tweeting: "It's a statement about women not having the ability to defend themselves under public gaze, not rebirth." 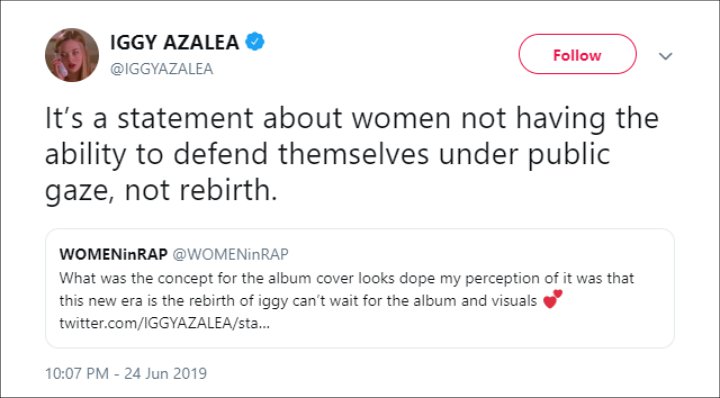 Iggy Azalea responded to the controvery surrounding 'In My Defense' cover album.

Despite many fans not being too keen on the image, others liked it and praised the singer for being so bold, to which Iggy replied: "I'm so happy you love the cover as much as I do! I can't wait till you see how pretty it looks in real life."

Iggy Azalea Vows to Stay Away From Creating OnlyFans Account