The 'Clarity' songwriter is apologizing to the 'Younger' actress with a sex toy for being a 'd**k' after starting an 'unnecessary argument' on pizza night.

AceShowbiz - Hilary Duff has received literally an apology d**k from her fiance Matthew Koma. The 32-year-old singer/record producer tried to make amends after starting an "unnecessary argument" during pizza night with a sex toy and he's making it public. 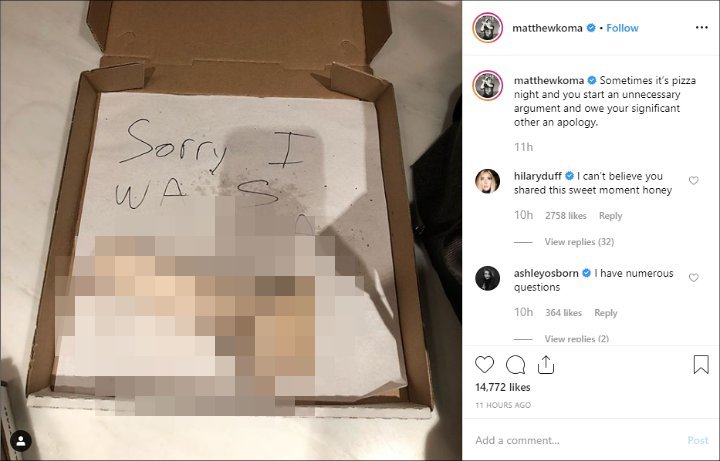 Fellow Instagram users began trolling the couple following Matthew's racy post, with singer Rob Thomas writing, "Sooo now we know you have one of those just laying around." Another commented, "now we know y'all into that kinky stuff."

"Lmao!!! This is great! She couldn't be mad at you after that gesture," read another comment, while another hilariously wrote, "Is that a big enough apology though?"

Hilary and Matthew got engaged in May this year, after welcoming their first child together, a daughter named Banks, in October 2018. She delivered the baby via a home water birth.

On Father's Day, the former "Lizzie McGuire" star posted a sweet tribute to her fiancee. Sharing photos of Matthew cradling their baby daughter, Hilary wrote, "Babe. You are the most natural papa bear I've seen. You always put us first. You know exactly what to say. Affectionate beyond. Calm and strong. The kids don’t even know how lucky they are that it's you.... but they will."

She went on raving, "It's a gift I get to witness everyday. We love you more than words. This is my favorite picture of you and Banksy on her arrival day. It's burned into my memory for life, the joy and disbelief on your face makes me smile and warms my heart every time i see it. Happy Father's Day! Now let's go get coffee because we still don't sleep."

Hilary also has a 7-year-old son, Luca, whom she shares with ex-husband Mike Comrie.