In the petition, the Christian group shows its disagreement in how God is 'voiced by woman' (Frances McDorman) in the series and how the series portrays the antichrist as a 'normal kid.'

AceShowbiz - A Christian group has made a petition calling for the cancellation of Amazon Prime's "Good Omens". The petition has garnered more than 20,000 signatures, and it would have been a big deal if only they don't direct the petition to a whole wrong company. Instead of directing the petition to Amazon, which is distributing the series, the group asks Netflix to take action on what they demand.

The six-part series, which is adapted from Terry Pratchett and Neil Gaiman's 1990 fantasy novel, debuted last month. Starring David Tennant as the demon Crowley and Michael Sheen as the angel Aziraphale, the show follows the two characters who collaborate to prevent the coming of the antichrist and an imminent apocalypse.

Christians, who are marshalled by the Return to Order campaign, an offshoot of the US Foundation for a Christian Civilisation, appear not to be keen about the storyline. "This series presents devils and Satanists as normal and even good, where they merely have a different way of being, and mocks God's wisdom," the group writes in the petition.

It also shows its disagreement in how God is "voiced by woman" (Frances McDorman) in the series and how the series portrays the antichrist as a "normal kid" while the four riders of the Apocalypse are portrayed as a group of bikers. Additionally, it says, "This type of video makes light of Truth, Error, Good and Evil, and destroys the barriers of horror that society still has for the devil."

"Please sign our petition, telling Netflix that we will not stand silent as they destroy the barriers of horror we still have for evil," it concludes in the petition.

While Netflix and The American Society for the Defense of Tradition, Family and Property have yet to respond to a request for comment, Gaiman has taken to his Twitter account to address the petition. "I love that they are going to write to Netflix to try and get #GoodOmens cancelled. Says it all really," he writes on the micro-blogging site. 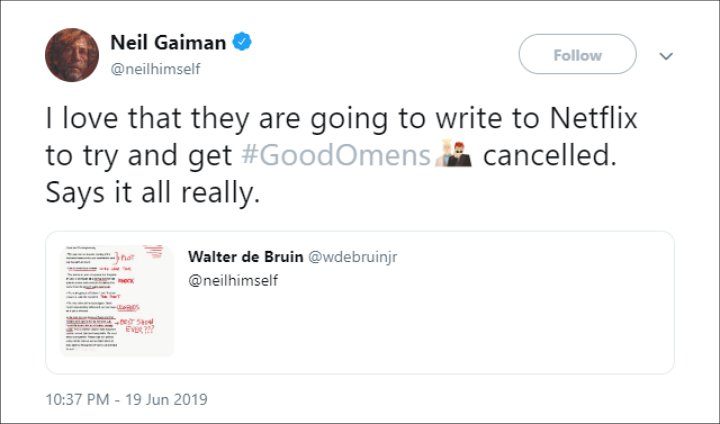 Amazon Prime made fun of the petition as well.

Amazon Prime also appears to make fun on the wrong petition by sending along their condolences to Netflix. "@netflix so sorry for your loss," the official Twitter account of the network playfully tweets. 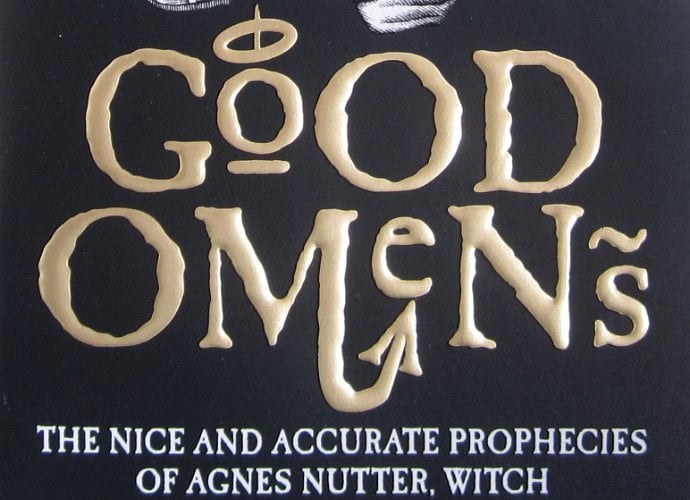