Choosing to go back to gym rather than having plastic surgery ever again, the mother of one already feels the benefit of working out as she says she hasn't 'got a headache ever since.'

AceShowbiz - Cardi B vows to never go under the knife again to enhance her look after experiencing dangerous side effects from her last procedures. The "Bodak Yellow" hitmaker, who recently got a liposuction after welcoming her first child with Offset, was forced to cancel her shows due to plastic surgery complications.

But the 26-year-old raptress has learned her lesson and chose a safer way to get the desired body. The Bronx femcee claimed she has gone back to gym and been working out for the last two weeks, and has already felt the benefit of exercising.

"I been working out for the past 2 weeks cause b***h I ain't getting surgery again," she tweeted on Wednesday, June 12, adding, "but let me tell you I haven't got a headache ever since."

Cardi B goes back to gym as she vows to never get plastic surgery again.

As she's still struggling to deal with the side effects from her last procedures, Cardi revealed a remedy that she's got possibly to reduce her swollen feet. "So today I woke up around 1pm cause I was jet lagged .Got my lymphatic massage,worked out for 1 hour," she shared in another tweet. "[I] was supposed to do rehearsal for 6 hours but I only did 4 cause I got a allergic reaction to some spice so now I'm just on twitter interacting wit ya while I rub my pubic hairs." 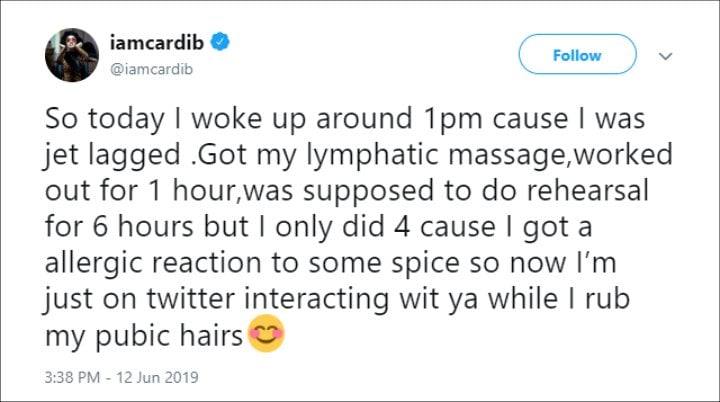 Cardi B reveals the remedy she's got possibly to reduce her swollen feet.

Meanwhile, "Botched" star Dr. Terry Dubrow has expressed his concern about Cardi's post-surgery side effects. "The question is, why is she still having complications this far out for a breast augmentation and liposuction," he said in a video released by TMZ. "The fact that her legs are still this swollen indicates that there's more going on than we're actually hearing about."

Cardi previously opened up about the complications she's experiencing from her plastic surgery that forced her to cancel more shows. "Look how swollen my feet get every time I take flights my stomach gets even more puffy," she wrote on Twitter along with a picture of her swollen feet and ankles. "Reasons why my doctor told me to chill on shows cause my feet and stomach burn when I get puffed up NOT due to ticket sales. Stop fakin s**t f**k outta here."

Denying that the shows were canceled because of low ticket sales, she added in another tweet, "All of the shows I canceled were sold out they even put it on the news on the El Paso news. I even show ya how swollen my feet got when I get off a plane so imagine how my stomach and my back get and the pain I feel due to surgery. Stop lying on me!"