In addition to listing all the bad things that her former 'Real Housewives of Beverly Hills' co-star did to her, the ex-model calls the latter her 'own personal devil.'

AceShowbiz - Brandi Glanville seemingly has made it clear that she won't be best friends with Lisa Vanderpump ever again. Taking to Twitter on Wednesday, June 5, the former model accused her former "The Real Housewives of Beverly Hills" co-star of trying to ruin her life, before listing all the bad things that the latter did to her.

"My truth about LVP is that she tried to ruin my life!" Brandi wrote on the micro-blogging site. "She had employees trash my wine,she gave ultimatums on the show it was either her or me." She also made a reference to the time when Lisa gave her testimony in Brandi's "smelly vagina" lawsuit with Joanna Krupa, saying, "She conveniently lost her memory during my lawsuit which cost me all of my savings."

Not having enough, the "Drinking and Tweeting" author then called Lisa her "own personal devil." Meanwhile, Lisa has yet to respond to the accusation. 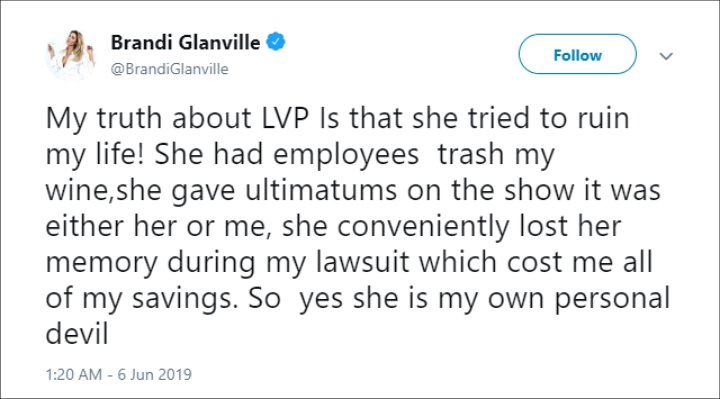 This arrives following the airing of "RHOBH" latest episode, in which Brandi and Denise Richards were discussing the infamous PuppyGate drama that took over season nine of the Bravo show. When Denise mentioned the accusation that Lisa leaked a story about Dorit Kemsley and her adopted pup, Brandi said, "She does have a direct hotline to Radar Online."

"Well, she did for sure," she stressed. "And of course she's gonna like you 'cause you're young and pretty and blonde. And she likes pretty things. She liked Dorit, she liked me." Brandi went on explaining how her friendship with the businesswoman fell apart, recalling the time when she accused Lisa of trying to embarrass Kylie Richards by bringing tabloids that highlighted the latter's husband Mauricio Umansky's alleged infidelity.

"Literally, I spent the past three years being punished for crossing her in a way," Brandi said. "She really in her head does nothing wrong."

Brandi Glanville Says Jen Shah Should Be Given Longer Prison Sentence: 'It's Not Fair'