Hollywood producer Phil Rosenthal, in the meantime, remembers the 85-year-old actor as 'one of the funniest people who ever lived,' while actress Jenna Elfman hails him her 'comedy hero.'

AceShowbiz - Carol Burnett is leading tributes to her TV co-star Tim Conway following his death on Tuesday, May 14.

The comedienne was left "heartbroken" by the sad news, and calls her "The Carol Burnett Show" sidekick "one in a million, not only as a brilliant comedian but as a loving human being."

She adds, "I cherish the times we had together both on the screen and off. He'll be in my heart forever."

Meanwhile, Phil Rosenthal, the creator and executive producer of TV comedy "Everybody Loves Raymond", calls Conway, "One of the funniest people who ever lived," and Jenna Elfman posted a statement on Instagram, adding, "We just lost a legend. Tim Conway. My comedy HERO. I had the blessing of celebrating his 80th birthday with him. Love you, Tim. Looking forward to you coming back and making the next generation laugh all over again. They'll need it." 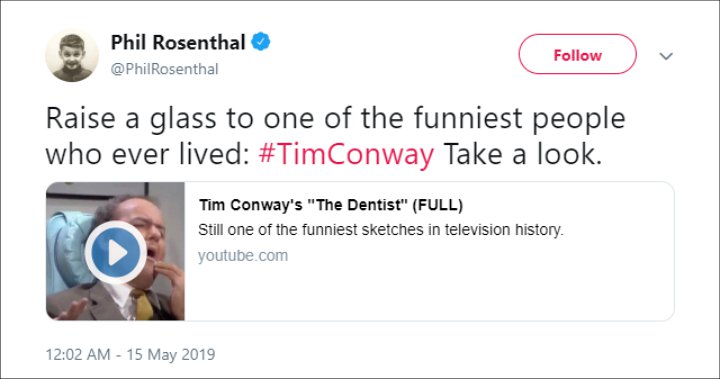 Conway, 85, passed away almost nine months after his daughter, Kelly, revealed he was battling dementia.

As well as 1970s variety series "The Carol Burnett Show", he also appeared on "The Steve Allen Show" and in World War Two sitcom "McHale's Navy".

Flowers will be placed on his star on the Hollywood Walk of Fame on Tuesday. Conway unveiled the honour in February 1989.

Carol Burnett Seeking Guardianship of Grandson as His Mother Is Suicidal