The 'Same Old Love' singer mingles with the guests, takes a picture with an adorable little fan, and makes a great toast to the groom and the bride at the party.

AceShowbiz - Selena Gomez attended her longtime bodyguard's nuptials in Redlands, California on Friday, April 3. The 26-year-old actress/singer looked gorgeous in a long sequin green dress with a deep v-neck and puffy sleeves, while styling her hair in an updo and sporting minimal makeup.

Her beauty shone in her simple, yet elegant look. As if that and her celebrity status were not enough to steal attention at the wedding, the former Disney darling delivered a sweet toast at the party.

"I had the pleasure of meeting Melissa, and I was thrilled, first off, 'cause she's a bada**," she said of the bride, as captured in a video taken by a fellow guest at the wedding. "Second, because of how much you love her; it's so special. I'm very honored to be here and to celebrate you both ... God bless you guys. We will be praying for you, and thank you so much."

Selena mingled with other guests at the party, but one of them couldn't help being starstruck when meeting the "Wolves" singer. "So I met @selenagomez and I'm so sad bc I got shy and awkward and couldn't say anything," one guest captioned her photo with the "Wizards of Waverly Place" alum.

The "Monte Carlo" actress also took a snap with an adorable little boy at the event. The boy appeared to be smitten as he sat on Selena's lap. Another young fan filmed her and Selena lip-syncing to the latter's song "Kill Em With Kindness". 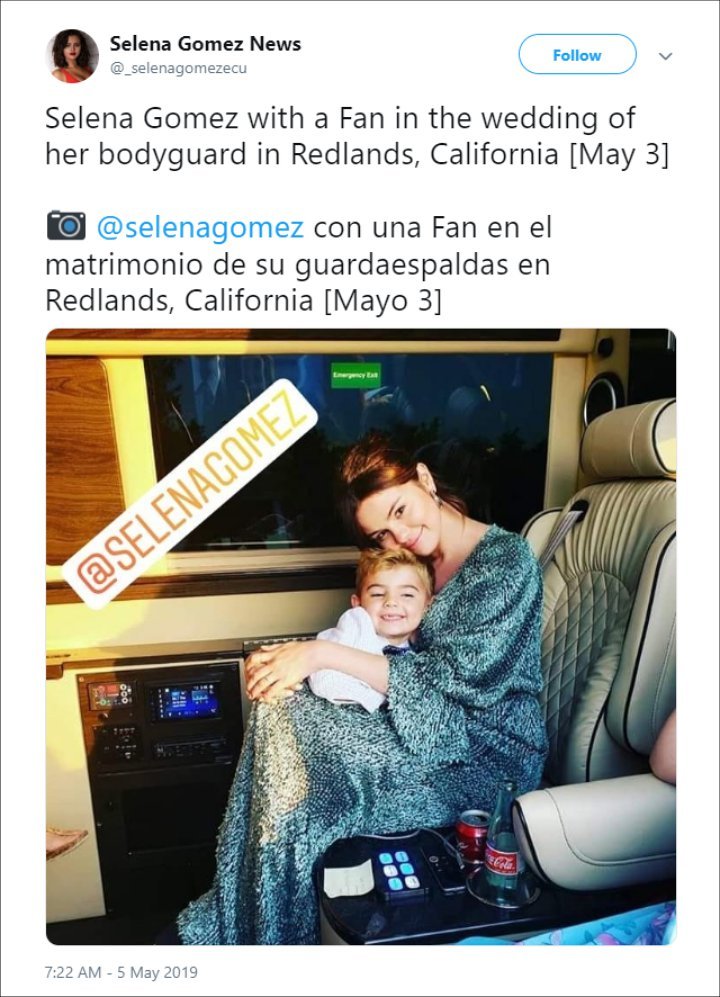 Selena Gomez took a picture with a young fan at her bodyguard's wedding.

Selena is slowly back into the public eye after her hiatus in late last year to focus on her health. She made her first red carpet appearance since her latest rehab stint at the 2019 WE Day event in Los Angeles on April 25.

The longtime WE Day supporter and former host looked happy and healthy as she arrived at the event in a long black dress with a plunging neckline. She flashed a big smile as she twirled on the blue carpet.

Selena Gomez Doesn't Mind Being Labeled 'Crazy' by Her Exes