During the episode, which marks his return after being fired from the popular NBC comedy show back in 1995, the 52-year-old comedian also makes a revival of 'Opera Man'.

AceShowbiz - Adam Sandler returned on "Saturday Night Live" on May 4. This marked the "Grown Ups" actor's first appearance on the NBC comedy show after he was fired in 1995. During his monologue, the comedian opted to make fun of his firing and sang about it.

Sandler told the audience his daughter asked why he left the show. "I was fired. I was fired," he sang. "It was so sad to tell ... I tried to call ['SNL' creator] Lorne Michaels but he never called me back."

He continued singing, "I think they just hate the Jews. I was fired, not rehired. It made me sad and blue." Later, he was joined by fellow "SNL" alum Chris Rock. He asked Rock, who was on the show from 1990 to 1993, why he left the show.

"I got fired. I was fired. I was fired by NBC," Rock sang. "Then I went on 'In Living Color,' three weeks later they took it off TV." Pete Davidson joined them but was then stopped by Sandler as he noted that Davidson had not been fired. "Be patient cause it's coming soon," he added.

During his episode, Sandler also made a revival of "Opera Man". He delivered laughter throughout the episode, but he chose an emotional route by offering a musical tribute to actor and fellow "SNL" cast member Chris Farley.

Originally performed by Sandler on his Netflix special "100% Fresh", the song talked about Farley's most famous characters and sketches on "SNL". They included motivational speaker Matt Foley, "Gap Girls" and "Lunch Lady Land." 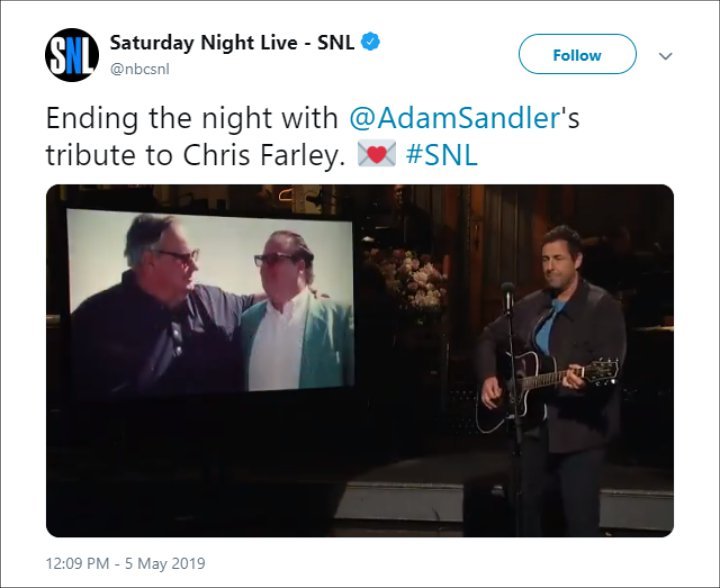 "He was a one-man party, you know I'm talking about, I'm talking about my friend Chris Farley," the lyrics of the song read. "He said 'Those guys are my heroes, that's all fine and dandy.' And when they ask me who's the funniest guy I ever knew, I tell them hands down, without a doubt, it's you."

Farley died in 1997 from an accidental overdose of cocaine and morphine. He was 33.

Scarlett Johansson Takes a Jab at Fiance on 'SNL'