After the 'Kidding' star expresses his admiration for her openness, the 'Thank You, Next' hitmaker answers back lightheartedly, 'i can't wait to tattoo this tweet to my forehead.'

AceShowbiz - Jim Carrey was counting his blessings over Easter when Ariana Grande namechecked him as she shared the movie star's take on depression.

The pop star was preparing to wrap up the second weekend of the Coachella festival in California when she took to her Instagram Story account and offered up "The Mask" star's theory.

Posting an image of Carrey's quote, Ariana shared: "Depression is your body saying, 'I don't want to be this character anymore. I don't want to hold up this avatar that you've created in the world. It's too much for me. You should think of the word depressed as deep rest. Your body needs to be depressed. It needs deep rest from the character that you've been trying to play."

Jim spotted the reference and responded on Monday, April 22, revealing his quote originally came from a pal named Jeff Foster.

"@ArianaGrande I read your lovely mention of me and things I've said about depression," he tweeted. "A brilliant teacher and friend, Jeff Foster, was OG (original gangster) on the 'Deep Rest' concept." 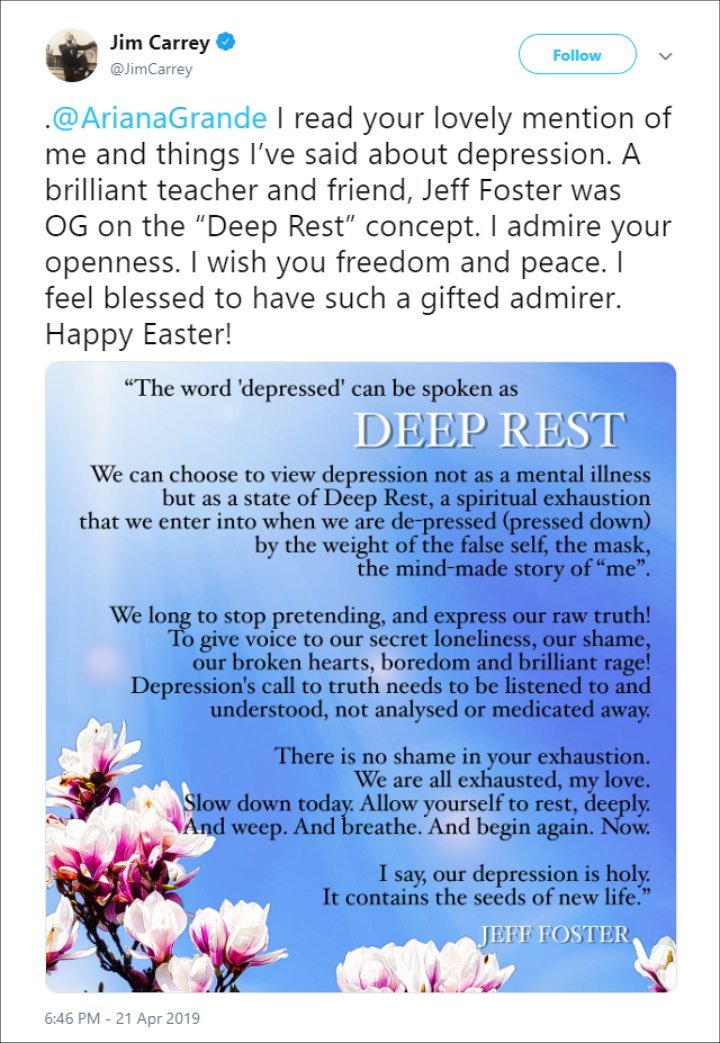 The thrilled actor added: "I admire your openness. I wish you freedom and peace. I feel blessed to have such a gifted admirer. Happy Easter!"

Ariana was just as thrilled to get feedback from Carrey, responding: "i can't process this or breathe hold on... thank u so much for your kindness."

"i don't think u understand how much i adore u or what u mean to me. thank u for taking the time to share this w me. you are such an inspiration. i can't wait to tattoo this tweet to my forehead. sending you lots of love & all things happy." 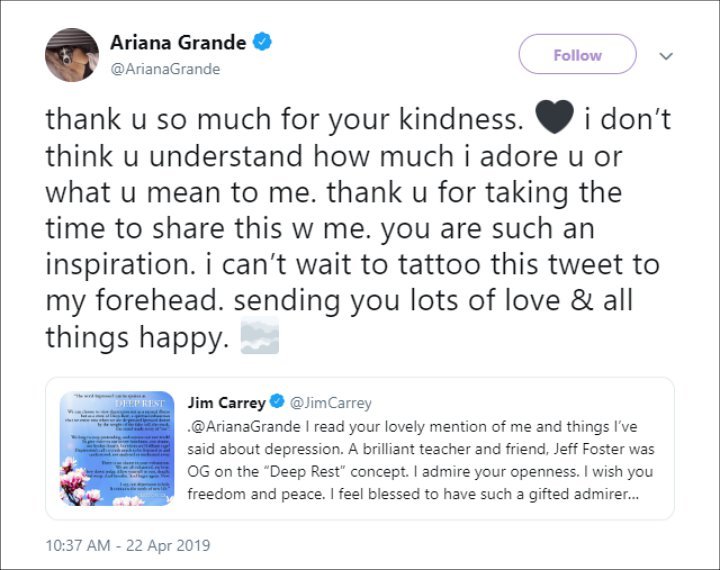 Ariana Grande raves about Jim and calls him an 'inspiration.'

Grande also shared a close up image of Carrey over the weekend and wrote: "I love you so much," before confessing that her first AOL Instant Messenger (AIM) username was "jimcarreyfan42" when she was in primary school.