Having been able to bring out the 'Magic Stick' rapper for an onstage duet at her Hammersmith Apollo show, the 'Hurtin' Me' MC turns to Twitter afterwards to express her respect for her idol.

AceShowbiz - British rapper Stefflon Don has heaped praise on her hip-hop idol Lil' Kim for gracing the stage at her concert in London over the weekend (April 20-21).

The "Hurtin' Me" MC sent fans into a frenzy at her Hammersmith Apollo show on Saturday night by bringing out Kim to perform alongside her on her 1997 Puff Daddy & The Family hit, "It's All About the Benjamins".

After the gig, Stefflon took to Twitter to express her undying gratitude to the rap star for making the special trip from New York at her request. 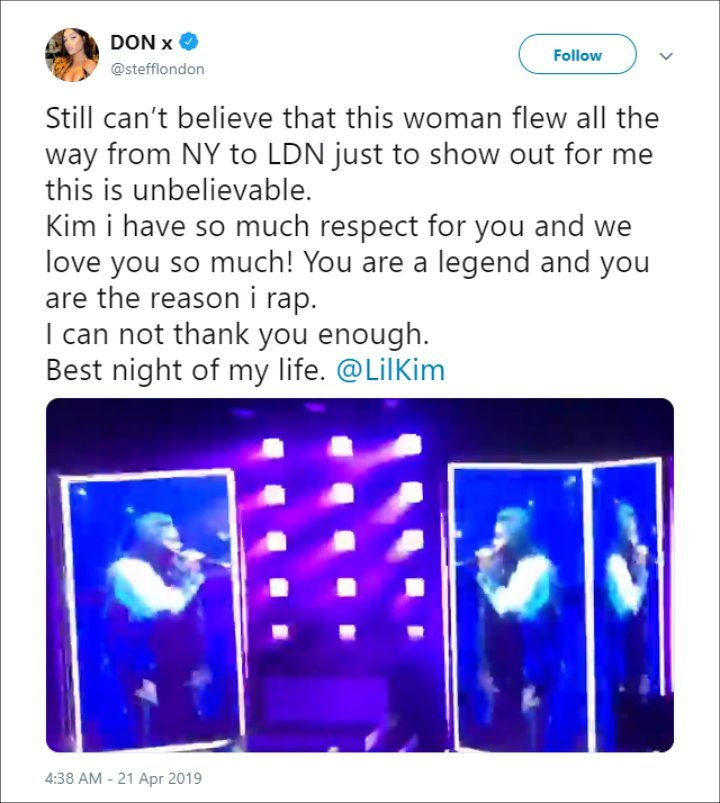 Stefflon Don gushed over Lil' Kim after performing together.

"Still can't believe that this woman flew all the way from NY to LDN just to show out for me this is unbelievable (sic)," she gushed. "Kim i have so much respect for you and we love you so much! You are a legend and you are the reason i rap. I can not thank you enough. Best night of my life (sic)."