The TV personality makes people wonder when she turns her account to private, with some mocking her as they think that the move is useless considering that she has almost 100 million followers on the platform.

AceShowbiz - Khloe Kardashian's recent social media activity raised people's eyebrows. The Good American Jeans founder suddenly set her Instagram account to private, prompting people to wonder about the reason behind her move. However, it appeared that it was purely accidental and Khloe herself didn't know how it was set to private.

In response to a fan who was wondering about the issue, Khloe admitted she also found it weird to know that her account was turned to private without her knowing. She said, "I was on my explorer page and I saw your post. I have NO idea how or why my page is private. I don't even know how to do that. Lol thank you for posting! I'm going to fix it. That's strange..."

Prior to this, Khloe was mocked by Twitter users who thought that she was attempting to stay low profile by turning her account to private. "Khloe Kardashian putting her instagram on private is so funny because it's not like there's already 91 million people already on there," one said. "Khloe Kardashian has no business making her IG account private! What she gotta keep private!? Everyone knows where she be and who she be with on a day to day basis LMAOO foh," another wrote. 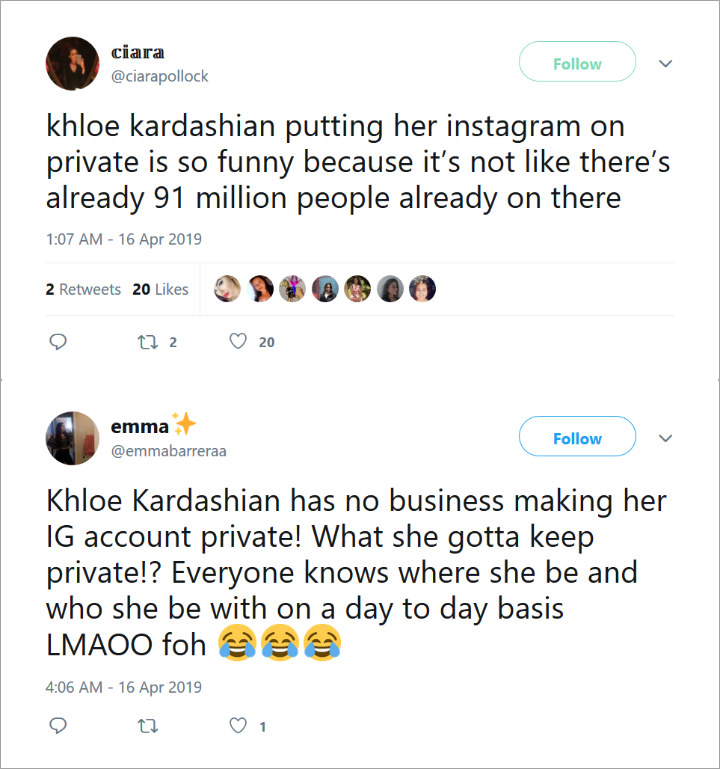 Meanwhile, some others wondered whether it had something to do with her ex Tristan Thompson, with one saying in a since-deleted post, "Khloe Kardashian really made her Instagram account private to hide her posts from Tristan like she isn't an international celebrity."

The exes recently reunited at their daughter's, True Thompson, birthday party at Khloe's home. In a video that the "Keeping Up with the Kardashians" star shared on Instagram Stories, Tristan could be seen playing with their little girl while attempting to talk to Khloe, who looked uncomfortable. Fans additionally pointed out that she was trying her best to ignore him.