Instagram Model Claims Bow Wow Paid Her to Get Abortion

The 'Edicius' rapper also received backlash from Lil Mama, who called him out after he dubs the latter an 'easy' woman.

AceShowbiz - Bow Wow might have been a dad, if an allegation from an Instagram model named Jasmonique is to be believed. The model took to Instagram Stories recently, claiming that she was pregnant with the "Let Me Hold You" rapper's baby before she was forced to get an abortion.

Posting a picture of a sonogram, she wrote, "I've been quiet about being pregnant because I didn't want my babys father Bow Wow to know. But it's unfortunate that just lie and be selfish asf!!"

"It hurts to see someone lost try to f**k up somebody that's not. You don't care about not even your self. I've been quiet and lying about this situation to protect you and you only did half of what needed to be done," she continued her rant. "You know I'm behind with things because of this baby. I'm tired if being nice and n****s like you make it hard to trust."

She then alluded that he rapper made him get an abortion as she said, "Getting rid of the baby didn't help you grow. You still on the same bs. I wish I never met you." She added, "Im disappointed that you know what you did and let a female be in a bad postition just to maintain a image."

Concluding the post, Jasmonique blasted Bow Wow, calling him "a f***ed up indivisual [sic]." She added, "I pray you mentally get better. This has been the worst 2 months of my life thank you for showing you not a man but a lil boy." 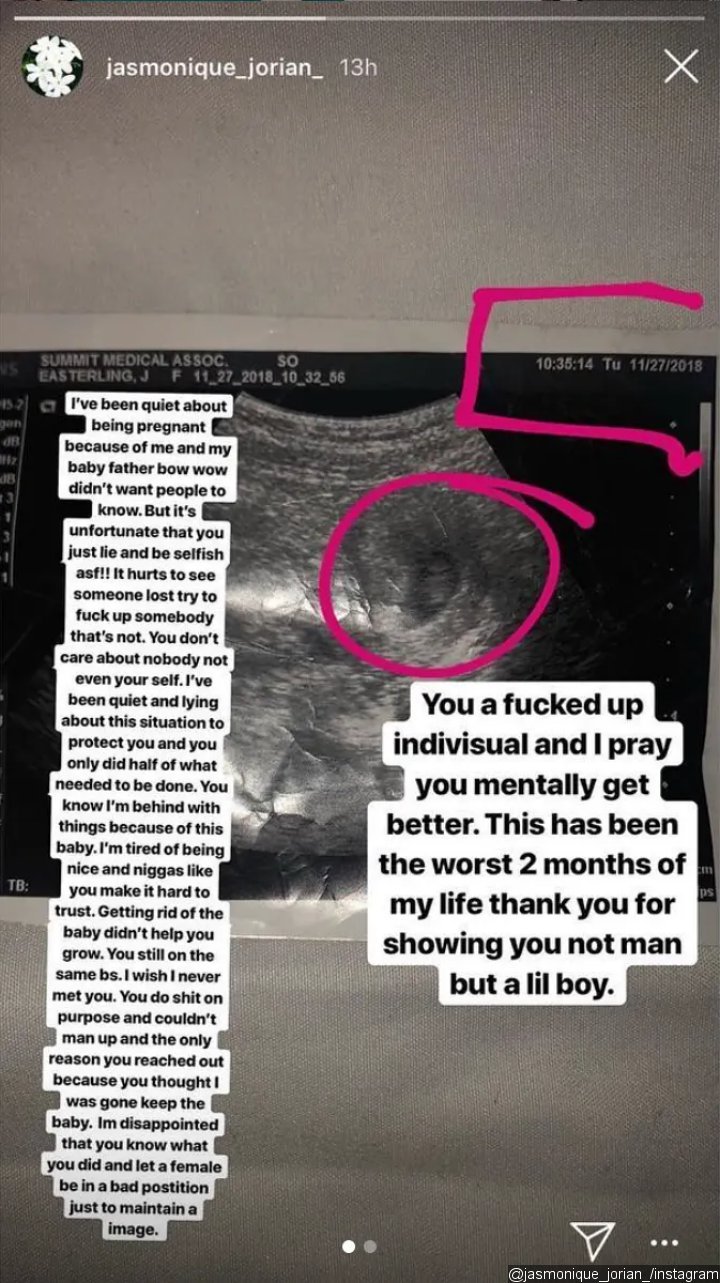 An Instagram model rants on the site, claiming that she was pregnant with the rapper's child before getting an abortion.

In addition, Bow Wow received backlash from Lil Mama, who called him out for his latest statement. On Sunday, December 9, the "Growing Up Hip-Hop: Atlanta" told his co-star BT that Lil Mama was "easy," adding that he could "be f***ing in a week."

The remarks obviously didn't sit well with Lil Mama. The "Shoe Game" rapper took a jab at the "Edicius" spitter as she said in now-deleted videos, "I want to start this off just by saying you played yourself, kid. Bow Wow, you know, that in all the years that I've ever known you, you have never known a n****a to f**k me in a week. So to even give BT advice like 'Oh y'all gonna be fucking in a week.' you're being a clown."

"I was trying to bring you around some real n****s," Lil Mama continued in another video. "You want to commit suicide one day. You're going crazy here. You're going crazy there. I come from a grounded environment that I was trying to bring you to. We're doing a TV show. We're creating content. You are far from the type of man that I could see myself being with, sleeping with or anything of that nature."

Lil Mama has some words for Bow Wow.

"Y'all could believe what y'all want to believe," she said at the of the video series. "Before we start talking about a female beating my ass or anything like that let's just be clear that I will smack the s**t out of you. Period!"

Sophia Bush on Quitting 'Chicago P.D.': I Was Programmed to Be a Work Horse

Bow Wow and Angela Simmons Fuel Dating Rumors, But Are 'Taking It Slow'