Despite Fans' Disgust, Rihanna and Chris Brown Are Still in Touch After Tumultuous Relationship

The 'Umbrella' hitmaker and her ex-boyfriend are said to be 'in frequent contact with each other' though people have often told the 'With You' singer to stay away from RiRi.

AceShowbiz - While many people still can't forget how badly Chris Brown hurt Rihanna during a physical altercation back in 2008, the 30-year-old singer herself apparently doesn't hold a grudge against her ex. Rumor has it, the two still keep in touch, five years after ending their tumultuous and on-/off-relationship.

A source tells Us Weekly, "Chris and Rihanna continue to be in frequent contact with each other. They are extremely supportive of each other's projects." Of why Rihanna remains good friends with Chris, the source explains, "There is a lot of history between the two of them. Rihanna is aware that there will be concern about her friendship with Chris, but she can handle herself."

The report about Rihanna and Chris' good relationship comes after Chris commented on Rih's sexy picture. The Barbadian beauty recently posted on her social media account several sexy pictures of her going topless in nothing but red Savage x Fenty bikini underwear, with the word "Naughty" written on the waistband, and black stockings.

Chris left a flushed face emoji in the comment section of one of the photos, prompting Rihanna's followers to slam him. "Stay away from Rihanna. Just stay away," one told him. Another similarly wrote to Chris, "Leave her alone u psycho."

Someone else responded to Chris' comment, "You are not a man. You're just a shame. Go away." Another reminded the 29-year-old rapper of his wrongdoing to his ex-girlfriend, "Dude you f***ed up real bad with her." 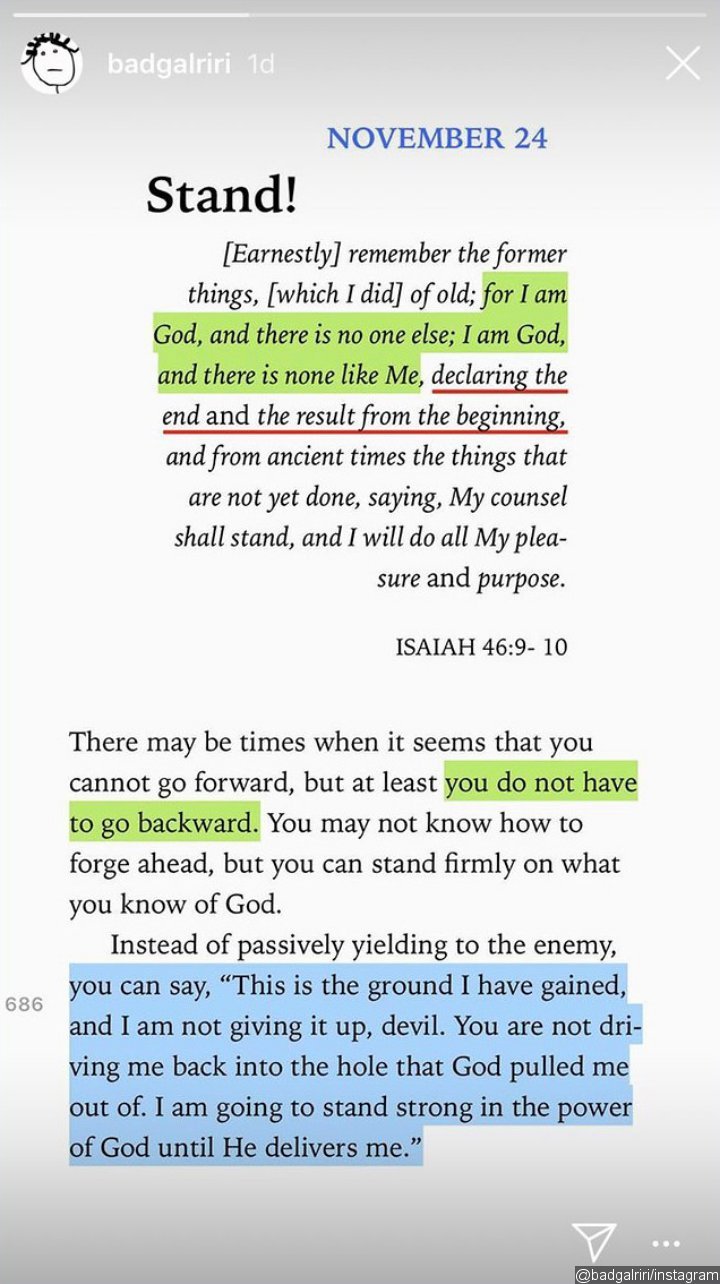 Rihanna posted a cryptic post after Chris Brown commented on her sexy picture.

Rihanna didn't directly reply to Chris' comment, but she later posted a cryptic message on her Instagram Story. She posted a screeshot of Bible verse that read, "You do not have to go backward" and "I am going to stand strong in the power of God until He delivers me." Many believe that the post was Rih's response to Chris' flirty move.