The 'Shakespeare in Love' actress wore a custom Valentino Couture lace dress during the nuptials attended by only 70 guests, including her best friend Cameron Diaz and 'Iron Man' co-star Robert Downey Jr.

AceShowbiz - Gwyneth Paltrow has released her official wedding photos for the first time. More than 40 pictures from her September 29 nuptials with Brad Falchuk are shared via her lifestyle website, Goop, giving inside as well as behind-the-scenes looks of the intimate celebration at her house in the Hamptons.

According to the website, "the revelry started the night before with a rehearsal dinner, where wedding guests dined alfresco under a canopy of bistro lights. And for the big day: perfect weather, a superlative dinner, a dance party for the ages, and a dress that defies adjectives." 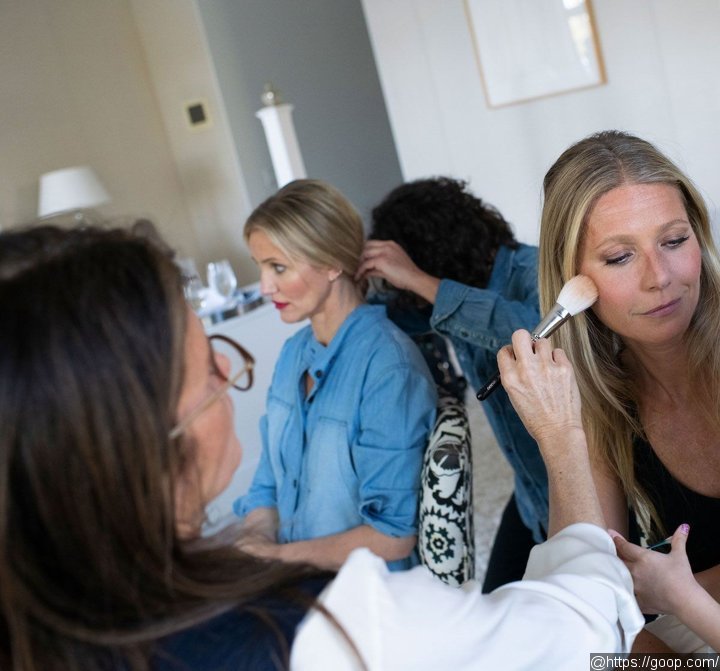 Gwyneth Paltrow prepared for her wedding along with her best friend Cameron Diaz.

The bride was stunning in a custom Valentino Couture lace dress featuring feminine cap sleeves, illusion neckline and an open-back. One photo showed her and her best friend Cameron Diaz, who attended the wedding with her husband Benji Madden, getting her makeup done by the beauty team. 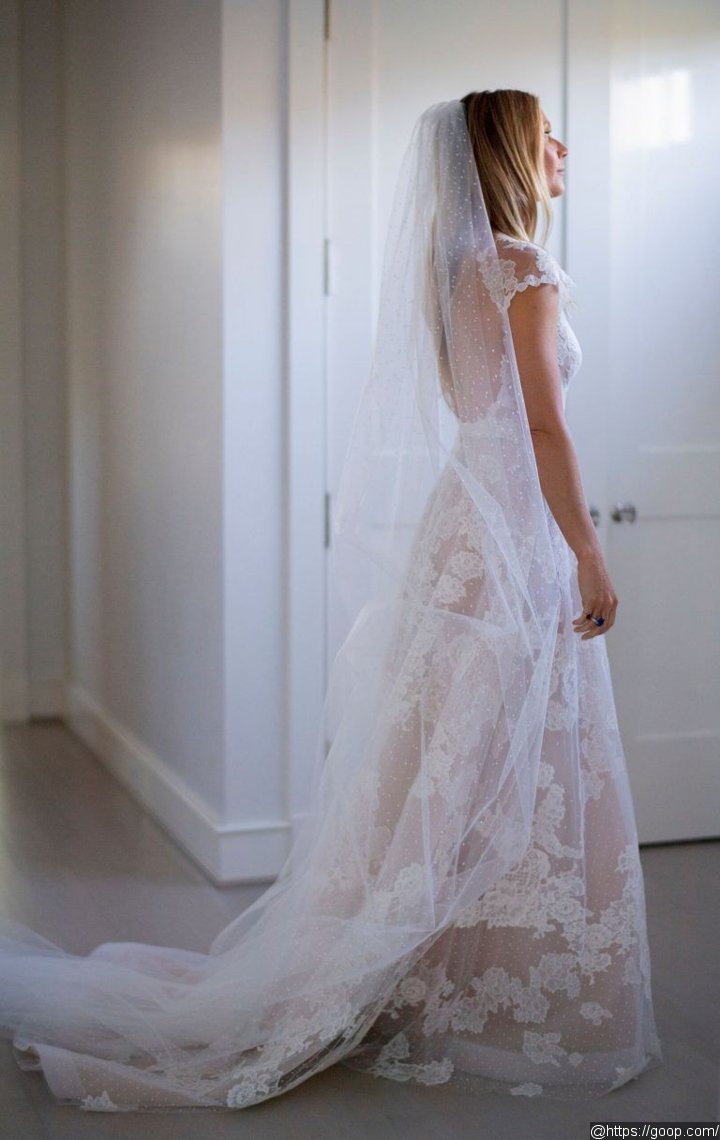 The couple was beaming with happiness as they walked back down the aisle with the guest showering them with leaves and flower petals. The groom looked sharp in a white shirt, dark gray suit and a black tie. 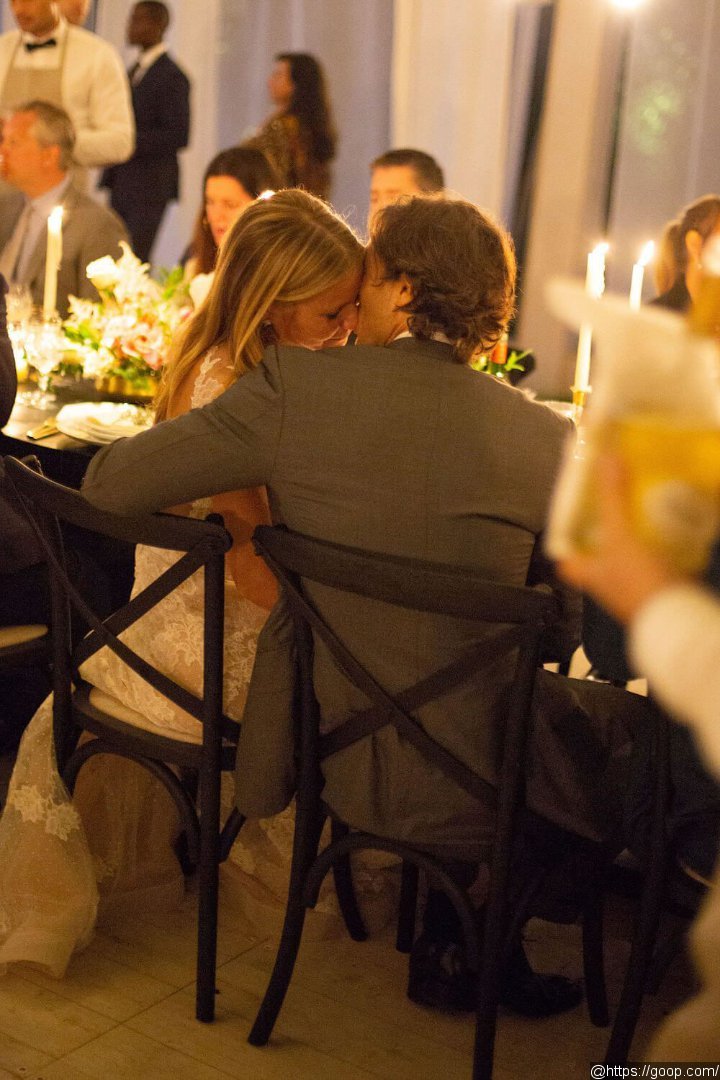 The newlyweds shared a tender moment.

Rob Lowe, Steven Spielberg, Ryan Murphy, Robert Downey Jr. and Jerry Seinfeld were among A-listers attending the wedding. They were treated to dirty martinis, gin cocktails and Ruinart Champagne. For the dinner, Mario Carbone, the James Beard Award-nominated chef, was in charge. They were served with Crab Louis' Dungeness crab and avocado, scampi tortellini San Marzano and Calabrian chili, as well as honey mustard duckling or prime rib among other dishes. 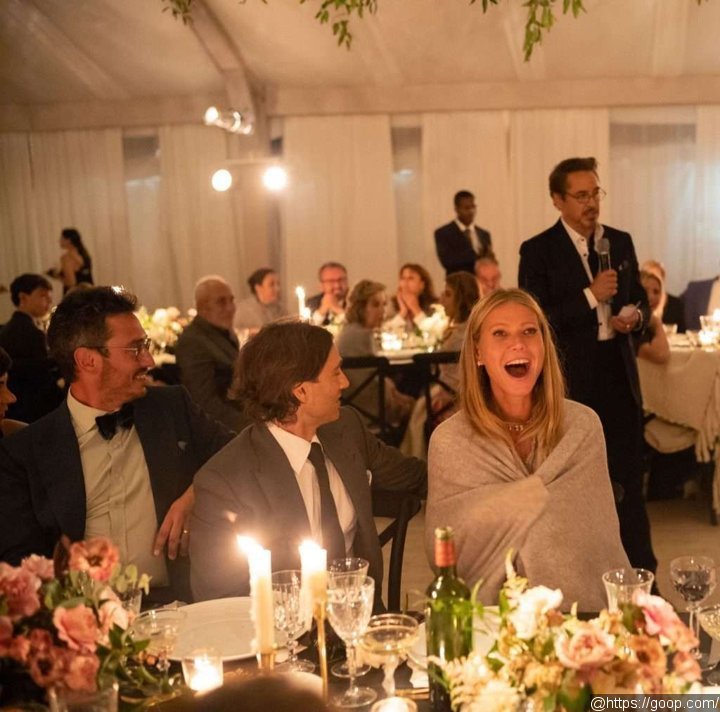 Robert Downey Jr. was speaking during the dinner.

Downey Jr., who is Paltrow's co-star in "Iron Man" movies and several other Marvel movies, was seen speaking during the dinner. The 46-year-old actress changed into a short Stella McCartney jumpsuit for the latter part of the celebration and danced the night away with her new husband. 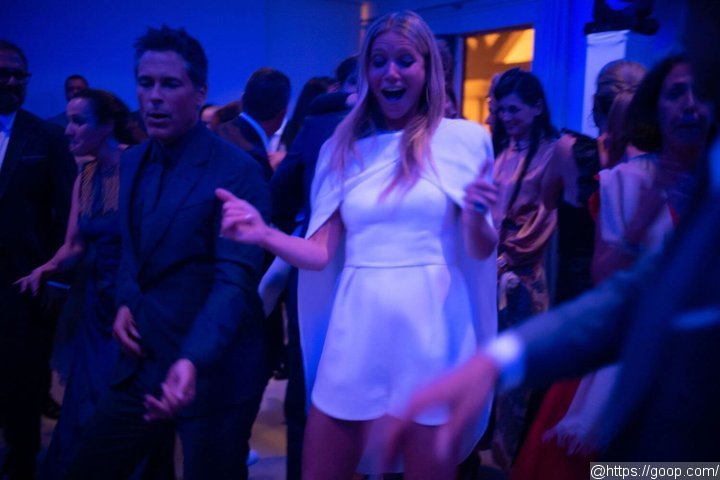 Paltrow changed into a more comfortable outfit to hit the dance floor.

It's the second wedding for both Paltrow and Falchuk. The former was married to Chris Martin from 2003 until their divorce was finalized in 2016, while the latter was previously married to television producer Suzanne Bukinik Falchuk.

Paltrow said in an interview with Marie Claire U.K. which was conducted before the wedding, "For a while, I thought, I don't know if I'd ever do it again. I have my kids - what's the point? And then I met this incredible man, who made me think, 'No, this person is worth making this commitment to.' "

Sharon Osbourne on Drugging Ozzy: I Was a Broken Woman

Gwyneth Paltrow on Raising Teenage Children: 'Everything I Say Is Wrong'