Responding to her sister's message which read, 'Relationship should help you, not hurt you,' the oldest Kardashian sister writes, 'YES YES YES.'

AceShowbiz - As Khloe Kardashian continues posting cryptic messages on social media, Kourtney Kardashian has shown her agreement to one of them. It was a post which the Good American Jeans founder shared on Monday, October 22.

The lengthy message featured several advices on how to get rid of "negative people" around yourself, but one advice definitely stood out more than the others as it talked about relationship. As some already know, it has been reported that Khloe is having relationship troubles with Tristan Thompson after he was accused of cheating again.

"Spend time with nice people who are smart, driven and likeminded. Relationships should help you, not hurt you," so the message read. Kourtney took a screengrab of the post and shared it on her own Instagram Stories account, writing on it, "YES YES YES. This makes all the difference." So does this mean Kourtney support the idea of Khloe and Tristan breaking up? 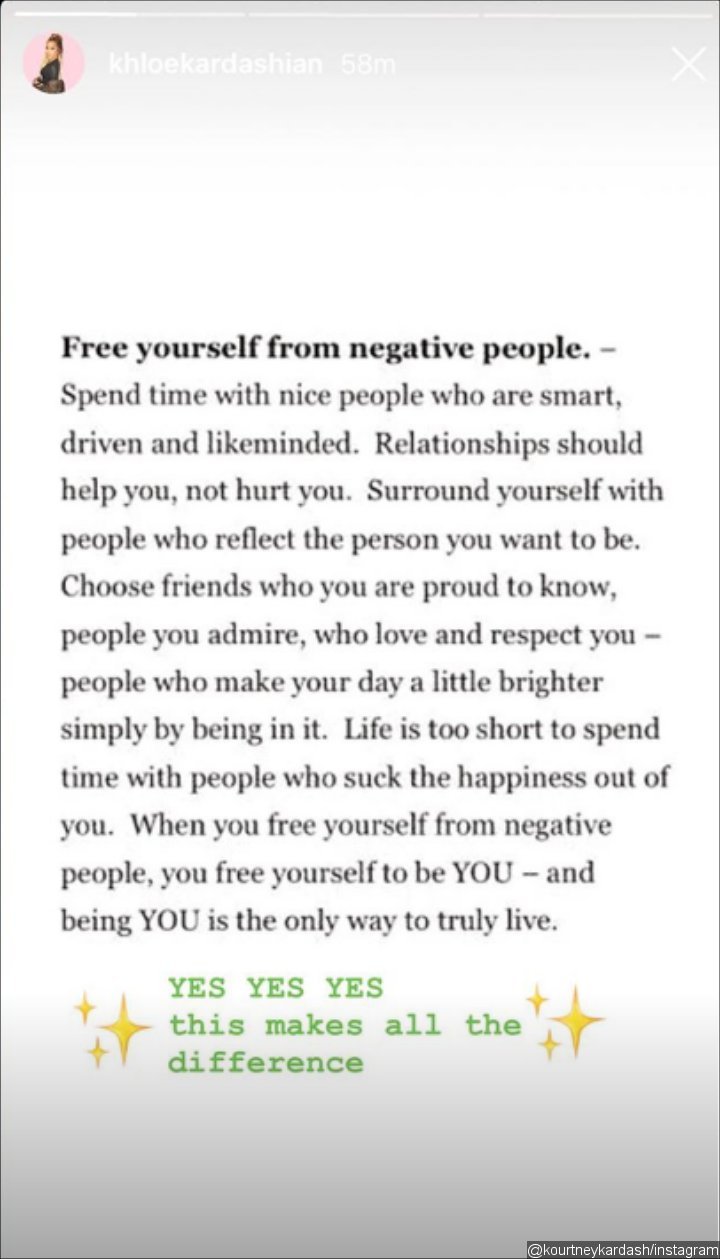 Khloe herself reportedly remains undecided about her future with the Canadian basketball player. "Khloe isn't saying that she and Tristan split. It seems she hasn't decided yet what she wants to do about their relationship," a source says to PEOPLE. "And she seems fine about this."

Meanwhile, his cheating allegation is allegedly what makes Khloe decide not to move back to Cleveland for the time being. "It's of course difficult to trust someone 100 percent who cheated days before he was about to become dad," another source shares to the site. "Khloe still struggles with this sometimes."

The insider continues, "She wants to move back to Cleveland, but she isn't sure what date she is [going]. The move is postponed for now. She seems very upset about leaving her family. She had the best summer in L.A."

Radio Host Cleared of Racism for On-Air Attack on BTS

Kourtney Kardashian Defends Keto Diet Amid Claims That It's 'Unhealthy'