This Safari date marks the third time the 'Queen' star and the Formula 1 racing driver are spotted together in September alone.

AceShowbiz - So, are Nicki Minaj and Lewis Hamilton together? The two, who have been rumored to be dating, appeared to further fuel the speculations as they had a blast together in Dubai. The "Anaconda" raptress and the four-time Formula One champion literally heated up during their getaway in the city with some quad biking a desert safari.

Nicki and Lewis, who were first photographed together during New York Fashion Week, took the wheel of an ATV. The 33-year-old racer took to his Instagram account to share a snap of their Sahara adventure. The photo saw them riding the same ATV with Lewish taking a seat behind the "Queen" star. The two looked comfortable with each other as they flipped the bird to the camera. 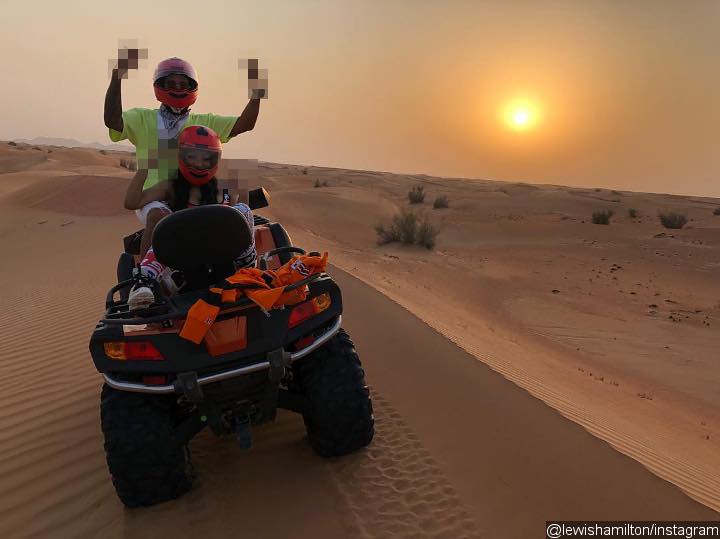 Nicki Minaj and Lewish Hamilton took the wheel of an ATV in desert safari during their vacay in Dubai.

Nicki also posted a picture of their trip. This time, it was a selfie taken by his handsome companion. "🇹🇹🇬🇩 Caribbean tingz what I on. Me & Lewis gettin paper like what ink dry on. #Versace," the Barbadian beauty wrote in the caption alongside the photo of them posing with matching red helmets.

🇹🇹🇬🇩 Caribbean tingz what I on. Me & Lewis gettin paper like what ink dry on. #Versace 💧

"Oh my gawd Lewis Hamilton and Onika babies be soooooo cute," a fan gushed about the rumored lovebirds in the comment section. "Now following @lewishamilton Just cos he's chilling with my Onika! I love anything that makes her happy." another supporting fan added.

This Safari date marks the third time they are spotted together in September alone. Prior to this, Nicki posted a video on her Instagram account of her walking on the beach in the moonlight, dressed head to toe in Versace, while speaking to a man with a British accent - who sounded very much like the racing star.

A source previously said that the "Bang Bang" hitmaker and Lewis were "definitely getting close." The source countinued saying, "There was an instant attraction between them the first moment they met, but neither of them wanted to jump straight in to anything serious, so they've been taking their time and getting to know each other."

The source also claimed that the self-proclaimed black Barbie was "super into Lewis" as "she adores his cute accent, and loves how successful and confident he is." It's also said that "Lewis has definitely got enough swagger to keep Nicki interested." The source added, "Now it's just a case of them making the time to be together as they both have crazy insane schedules."