The Boom! Studios founder hinted at the planned series in a now-deleted Twitter post on Wednesday, September 19. "I guess I can confirm I am indeed in final talks to write and show-run the new DIABLO animated series for Activision and Netflix," he wrote. "It's very exciting and I hope the High Heavens it all works out." 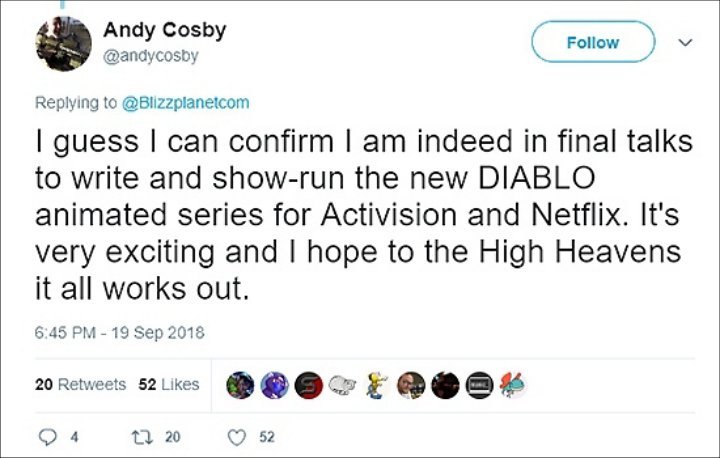 A rumor of a Diablo-based TV series first emerged last month. However, prior to this, it was widely assumed that the planned series would be a live-action one.

Fans definitely will be happy if Netflix really develops an animated series based on Diablo. Not to mention, there's this high hype surrounding Diablo franchise since the recent Nintendo Switch reveal, so it's definitely a good timing to announce a TV series of the video game.

Spanning three games across two decades, the Diablo series is set in a fantasy realm called Sanctuary. Fixated between the High Heavens and the Burning Hells, players take on the role of a hero attempting to defend Sanctuary from the invading forces of the Burning Hells which is led by the demon Diablo. So far, the games have been adapted into a number of tie-in novels and comic books, which continue the story of Sanctuary and the conflict between the various forces who attempts to claim it.

Cosby deleting the tweet may mean the news would will likely be announced in an official capacity anytime soon. The Diablo series will join other video game-inspired series on Netflix. The streaming giant previously debuted "Castlevania" animated series which was a monster hit. The second season is set to premiere on Halloween.

Additionally, Netlix is developing a series based on "The Witcher". Henry Cavill has been cast as the monster-slaying hero Geralt of Rivia.

Cardi B Gets Drunk in Milan After Nicki Minaj Feud