The 24-year-old model calls out a webloid which posted a picture of him sharing a hug with a mystery lady after enjoying a sushi dinner with his female pals.

Not letting the rumors spread like wild fire, the former boxer took to Instagram to shut down the reports. He wrote on Instagram Stories, "Where are the 6 others mens i was with? What you guys trynna do? Nice cut tho you piece of s***," implying that he was not alone with the two ladies during the sushi dinner.

He also called out Daily Mail which reported the story. Posting a screenshot of the article which featured a picture of Younes sharing a hug with a pretty lady, he wrote on it, "Daily Mail aka Daily Bulls**t." 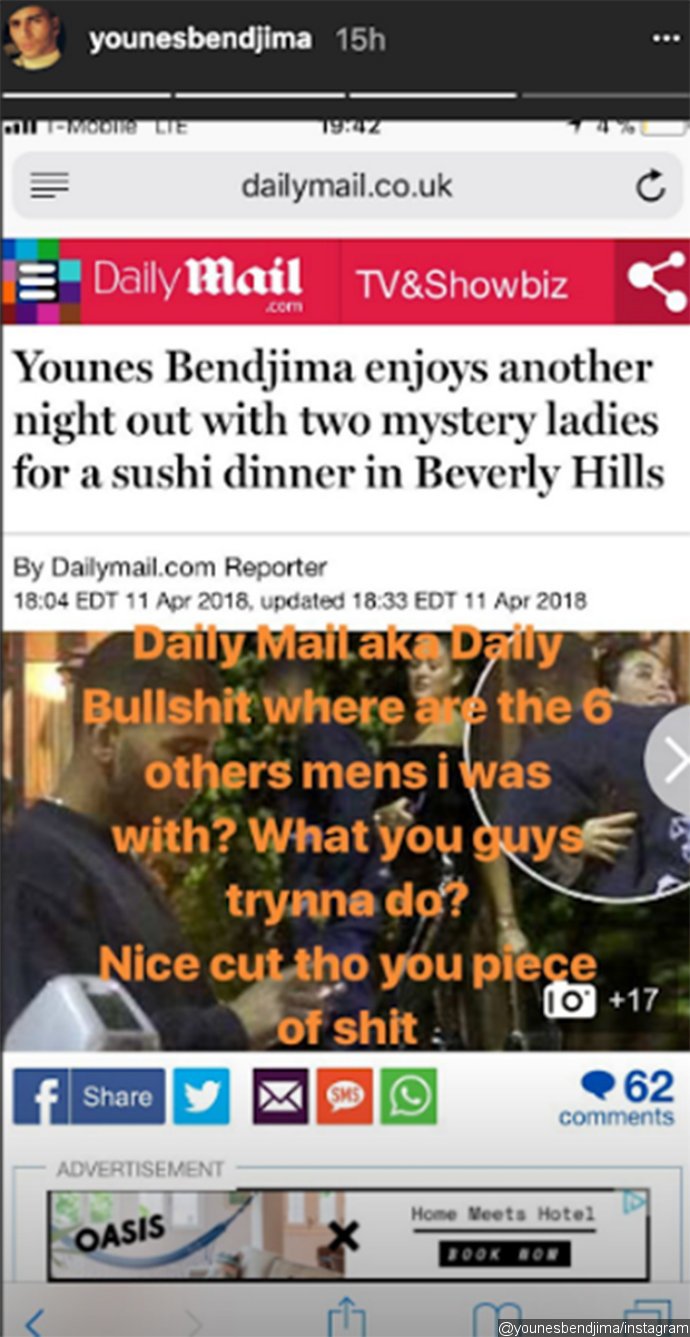 The photo was taken on Tuesday night, April 10 after Younes and his female pals enjoyed a sushi dinner at Matsuhisa together. While the site didn't directly accuse Younes of infidelity, the webloid suggested that he had been spending time with several women, including Leonardo DiCaprio's girlfriend Camila Morrone on Monday night, while his girlfriend Kourtney and her sister Kim Kardashian were away in Cleveland to be by their sister Khloe's side after Tristan cheating scandal came to light.

Khloe gave birth to her first child, a baby girl, with Tristan on April 12. Kourtney and Kim have since returned to Los Angeles. The two were spotted in the city on Thursday evening after flying to Ohio for the birth of Khloe's daughter.

The cheating rumors aside, Kourtney and Younes seem to remain strong as they recently had a romantic getaway to Turks and Caicos. They spent five days at lavish resort the Amanyara Resort in the Caribbeans last week.

"They were very sweet together and blissfully in love. They seemed like they were on their honeymoon the way they held hands and smiled at each other," a source told E! News. "Their stay was very private and romantic."

Nicki Minaj Tears Up as She Confirms Cardi B Feud Rumors