The 'Winter Sonata' actress has just tied the knot with her non-celebrity boyfriend, her agency confirms.

AceShowbiz - Choi Ji Woo is officially off the market! The 42-year-old South Korean actress surprised everyone when she suddenly announced on Thursday, March 29 that she has gotten married to her non-celebrity boyfriend, whom she secretly dated for approximately a year.

The actress, who gained international fame after starring on drama series "Winter Sonata" (2002) and "Stairway to Heaven" (2003), confirmed the news through a statement released by her agency YG Entertainment. She also shared a handwritten letter on her official website, along with a picture of her in wedding dress.

"I feel shy and nervous writing a letter for the first time in a while. It's a bit sudden, but I have great news," she began. "I tied the knot on March 29 with someone I want to start a new life with. We held a private wedding ceremony with only our close family members in attendance. I will start a happy family with the person I love, and we will always respect each other."

She continued, "I should've let you guys know earlier, but I wanted to be careful because my [husband] is not a public figure. I hope you will understand and give us your blessings. I will always remember the love and support you have given me, and I will continue my career as an actress." She then concluded, "Please stay healthy. Thank you, and I love you." 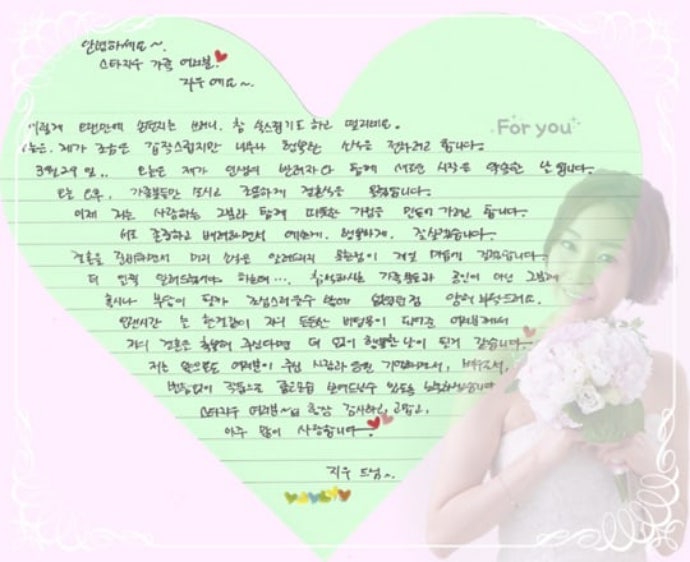 The wedding news is surprising yet delightful as Choi Ji Woo was never reported to be in a relationship with her now-husband before. The identity of her husband is currently unknown.

The actress, who also starred on "The Suspicious Housekeeper", "Second 20s" and "Woman with a Suitcase", dated her "Air City" co-star Lee Jin Wook, who is six years her junior, from 2009 to 2011.

Choi Ji Woo reunited with her "Stairway to Heaven" co-star Kwon Sang Woo on 2014's "Temptation". She most recently starred on tvN's family drama series "The Most Beautiful Goodbye" (2017).