The 'Touch My Body' singer is coy when asked if her ex-husband Nick Cannon will appear on the show and calls 'American Idol' an 'abusive experience' when appearing at the TCA's summer press tour.

AceShowbiz - Mariah Carey was on full diva mode when attending the Television Critics Association's summer press tour on Wednesday, August 3. The singer showed up in a barely there black lace dress and fishnet stockings accompanied by some hunky shirtless men, while holding a glass of champagne.

She was on hand to promote her E! docuseries "Mariah's World". The eight-part series is set to premiere Sunday, December 4 at 9 P.M. It will follow her as she goes around the world for her "Sweet Sweet Fantasy" tour and give a look at her personal life, including her wedding plans to fiance James Packer.

Her twin children Moroccan and Monroe will appear on the show, but she and ex-husband Nick Cannon are still discussing how much the twins' portion on the show will be. "Here's the thing, they could have their own show because that's how funny they are," said Carey of her children. "I just have to figure it out - with Nick - how much they're in the show. They're in my life. We'll see. I think it should be sparring." 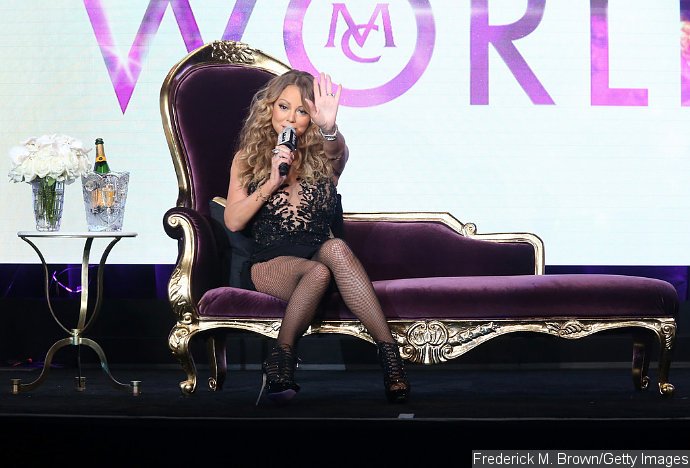 She was also coy when asked if Cannon would be on the show. "I can't speak for [him]. He's his own person. He's cool about coming around the show," she said. When pressed by a critic, "So he will be in the show?" she replied, "Well, I said he came around, I don't know what makes the final cut."

Carey later took a dig at "American Idol" when asked what she learned during her stint as a judge on the singing competition series. "Oh, it was the most abusive experience," she said, adding, "By the way you've just driven me to drink."

On her favorite show, she told the press that she loved "Scandal". "I really do love 'Scandal'," she admitted. "Actually, I watch it on Netflix over and over... I'm a fan of the show."

A new promo for her docuseries "Mariah's World" gives a look into her glamorous lifestyle. Lying down in a sexy lingerie, she says, "Is this a normal outfit for people to wear? I don't know, but I'm at home and this is what I wear."

She is also seen playing with her kids and pranking call someone in a thick New York accent. There's additionally a glimpse of her trying on wedding dresses in between footage from behind the scenes of her tour.