The 68-year-old actor recounts funny moments he had with the boxer and explains how much his friend of 42 years really meant to him at a funeral held in Louisville, Kentucky, on Friday, June 10.

AceShowbiz - Following the Islamic prayer service for Muhammad Ali, his family, friends and fans headed to the KFC Yum! Center in Louisville, Kentucky, on Friday, June 10 to pay tribute to the late boxing legend. Billy Crystal was one of the many famous faces who took the podium to deliver his heartfelt eulogy.

The 68-year-old actor began, "Today, this outpouring of love and respect proves that 35 years after he stopped fighting, he is still the champion of the world. Last week, when we heard the news, time stopped. There was no war. There was no terrorism...The world stopped, took a breath, and sighed." 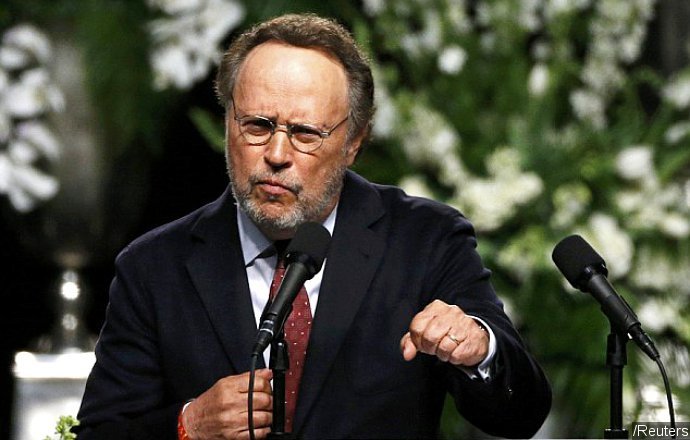 "Since then, my mind has been racing through my relationship with this amazing man, which is now 42 years that I know him. While others can tell you of his accomplishments, he wanted me to speak and tell you of some personal moments we had together," he continued.

Crystal then talked about his 42-year-old friendship with Ali, recalling moments when he first knew him. Crystal was hired to perform at an event honoring Ali in 1974, in which he debuted his Ali skit. "Here I was a white kid from Long Island imitating The Greatest of All Time- and he was loving it," he said, adding that Ali gave him a hug after his performance and whispered in his ear, "You're my little brother."

"That's when I saw him for the first time in person. It's very hard to describe how much he meant to me. You had to live in his time," Crystal said. "To live in his time, watching his fights, experiencing the genius of his talent was absolutely extraordinary. He was funny, he was beautiful, he was the most perfect athlete you ever saw and those were his own words," he added. "But he was so much more than a fighter."

Crystal concluded his touching eulogy by saying, "But didn't he make all of our lives a little bit better than they were? He was a tremendous bolt of lightning, created by mother nature out of thin air, a fantastic combination of power and beauty."

Also delivering eulogies at the event were Bryant Gumbel and Bill Clinton.