Beside featuring lead actresses Dakota Fanning and Kristen Stewart, the brand new images also give the first look at some of the upcoming film's characters.

AceShowbiz - More looks at Dakota Fanning in "The Runaways" have been shown through some fresh pictures. Beside highlighting the two major characters, Fanning's Cherie Currie and Kristen Stewart's Joan Jett, the stills also manage to introduce the whole members of the band.

"The Runaways" is based on the 1970s all-girl rock band of the same name, which were brought together in late 1975 by impresario Kim Fowley. Being expected to be an easy sell with a novelty act of teenaged girls performing in leather and lace, the girls ended up proving to be serious and influential musicians.

The film itself will cover the formation of The Runaways through to Cherie Currie's departure at the peak of their success. It is also said to highlight the relationship between lead vocalist/keyboardist Cherie and guitarist/vocalist Joan Jett. Premiered during the 26th Sundance Film Festival on January 21-31, this biopic is planned to be dropped in U.S. theaters on March 19. 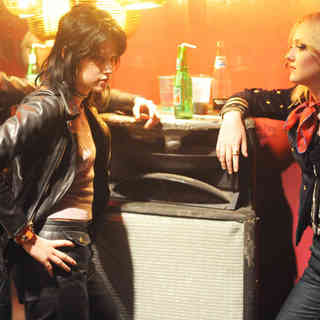 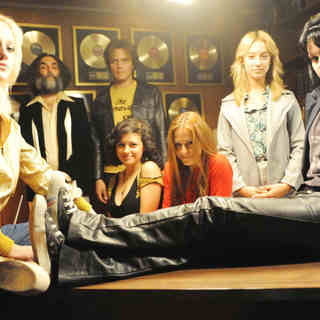 *UPDATE: Beside releasing the new stills, Apparition has also debuted a new clip for "The Runaways". Featuring Dakota Fanning, Kristen Stewart and Michael Shannon, the snippet highlights Cherie Currie who is being introduced to Joan Jett by Kim Fowley while they are at a club.