Like the previously-outed picture from 'Bruno', Sacha Baron Cohen becomes the center piece of the three new promo photos of the comedic faux documentary.

AceShowbiz - After unleashing a picture of Sacha Baron Cohen posing with his on-screen African American baby in their promotional effort for "Bruno", Universal Pictures have brought forth a set of fresh images for the upcoming comedy movie. Three in all, the photos focus only on Cohen as his gay Austrian fashion reporter character.

One of the pics sees Bruno standing against the wall in a tight black shorts and tiger-striped sleeveless shirt. Another photo displays the fashion reporter in a crawling position with his right hand reaching out to the camera. The last photo exhibits half naked Bruno straddling a white horse with his lower body covered by a piece of white cloth.

The photos aside, Universal Studios have announced that "Bruno" is officially an R-rated movie. The MPAA's rating board toned down the NC-17 rating to R rating reportedly after viewing a new edit of the film. Of the new rating, the board explained that the movie contains "pervasive strong and crude sexual content, graphic nudity and language."

Directed by Academy Award-nominated filmmaker Dan Mazer, "Bruno" is developed from one of Cohen's noted characters in comedy television series "Da Ali G Show". Taking the format of another faux documentary "Borat", the movie is said to highlight the interviews between the eccentric gay Austrian fashion reporter and unsuspecting guests, which allegedly include Arnold Schwarzenegger and Ben Affleck. It is set to open in U.S. theaters on July 10. 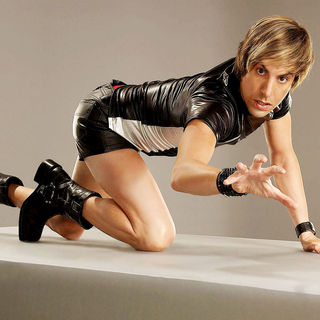 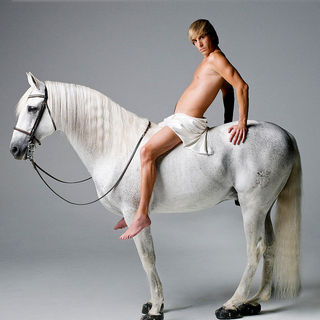