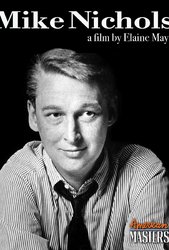 Winner of an Oscar, a Grammy, four Emmys, nine Tonys, three BAFTAs and many other awards, director, actor, writer, producer and comedian Mike Nichols (November 6, 1931 - November 19, 2014) was an artistic trailblazer. As the legendary comedy duo Nichols and May, Nichols and his partner Elaine May revolutionized comedy in the late 1950s and early 1960s. Now, May has directed the first documentary about her former partner, "Mike Nichols: American Masters".