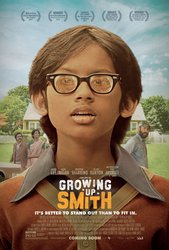 "Growing Up Smith" is the feel-good, coming-of-age story of Smith, a 10-year-old boy from India growing up in Small Town, America in 1979. As the boy's family tries to straddle the line between embracing the American Dream and preservering their Indian heritage, Smith sneaks out for a taste of Kentucky Fried Chicken, dons a "Saturday Night Fever" costume, and contends with his parents as they send him to school with a yellow squash instead of a pumpkin to carve for Halloween.

And as Smith falls head over heels in love with Amy, the girl next door, he finds in Amy's father, Butch, the all-American cowboy he wishes his own father could be. But when Smith goes hunting with Butch, Smith's father, Bhaaskar, fears Smith will lose any hope of remaining a respectable Indian boy and banishes him back to India. Nineteen years later Smith will return to America, back to a place he once called home.