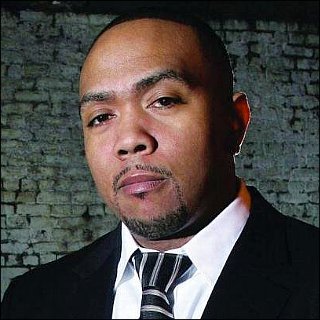 Keeps sticking in the industry though the competition is stiff with the appearance of many younger talented artists, Timbaland definitely is the pro. Suddenly everybody wants to work with the hottest producer in town. Def Jam Recording artist Fabolous demanded him to give a hand on his single "Make Me Better", Bloc Party frontman Kele Okereke was desperate for his assistance and even Madonna trusted him to guide her R&B passion. After helps catapulting numerous artists to stardom, Timbaland deserves to enjoy the piece that he solely owns. His second solo album "Timbaland Presents Shock Value" was released on April 3, 2007 and seized the 5th post on the US Billboard 200, moving 138,000 copies in the first week. It was his best chart topping effort in his entire solo career. The same fate, only better, happened to his first single "Give It to Me" featuring Nelly Furtado and Justin Timberlake that absorbed 148,000 digital downloads and smashed the #1 slot in Billboard 100. He is most wanted for one solid reason. His works can't cheat to receive the good reviews.

Timbaland did not come out "production wise" out of sudden since he had stayed in the business actually long enough to know every nook and corner. His journey in the music industry started in early 1990s when he became acquainted with two persons that will walk by his side throughout the entire career. His birth town Norfolk, Virginia had united the March 10, 1971 born producer with Melissa Arnette Elliott or better known as Missy Elliott and Melvin Barcliff aka Magoo. With the former he owed the "belief in him" and with the latter he was indebted to the "loyal companionship." Originally named Timothy Z. Mosley, Timbaland lived in the same neighborhood where Elliott lived. They became friends knowing that they shared the same passion and headed to the same direction. Mosley initially shaped his talent by making sounds out of his Casio keyboards. He acknowledged himself as DJ Timmy but his career as DJ was limited only to his hometown. Elliot though, launched her career first by forming R&B group named Sista in late 1980s. Mosley was trusted by Elliott to be the group's producer and began making demo tapes for them. The collaboration resulted in Sista sealing a deal with record producer DeVante Swing. This required the group to move to New York City. Elliott did not leave Mosley behind; she bagged him and their friend Barcliff along.

In the big city, Mosley was signed to Swing Mob, the same label that took Elliott in. His name was changed to Timbaland for a commercial purpose and he began working for DeVante. Under the label's wing Timbaland earned the best experience: tying relationship to other musicians such as Ginuwine, Sugah, Tweet, Playa and Pharrell Williams. These lots were later joined in several collaborations and known as "Da Bassement" crew. Although the bond was quite solid, the group slowly began to crumble in 1995. Each of them began their individual projects, but some still stuck together. These remaining members were Elliott, Timbaland, Magoo, Playa and Ginuwine. Timbaland kept his talent running by scoring music for 702 and Ginuwine. In the former his work became first recognizable through the Elliott-written song "Steelo", while in the latter he brought a greater achievement through single "Pony". Along with Ginuwine, he created the single that ruled US R&B chart and sat at #6 in Billboard's Hot 100. Both of them shot to stardom, Ginuwine as a breakthrough artist and Timbaland as a notable hit maker.

His name soon traveled to Aaliyah who immediately asked him to collaborate in her album "One in a Million". Like his work with Ginuwine, Timbaland put this project on top of the game. It paid back when "One in a Million" was certified double platinum within a year. Timbaland then devoted some time for his group with Barcliff named Timbaland and Magoo. Timbaland's baritone plus Magoo's unusual yet natural high-pitched voice made a perfect combination for a sultry hip-hop vibe. Their first album was out in 1997 under the title "Welcome to Our World". The record featured guest appearances from his fellow warriors such as then-famous Missy Elliott, Aaliyah, Ginuwine, Playa, and others. Overall this album had a number of successful singles that helped it went platinum. The duo took a hiatus afterwards and later on recorded two more albums. 2001's "Indecent Proposal" and 2003's "Under Construction, Pt. II" sadly failed to reprise the success of the debut album. In 1998 Timbaland tried to pursue his solo career by launching "Tim's Bio", an album that actually featured another partnership from his 'clan'. By 2000, Timbaland as a producer climbed the ladder of achievements through Missy Elliott's highly commercial albums, Jay-Z's most commercially success album "Vol. 2: Hard Knock Life", and also the launching of new star Petey Pablo. His range though was not limited to hip-hop artist. As more and more people recognized his work, Timbaland raised the bar by handling other type of music such as Limp Bizkit's Nu metal and Beck's alternative rock.

In 2001, Timbaland enlarged his territory by establishing Beat Club Records. The first artist to sign and release an album under this label's wing was rapper Bubba Sparxxx. The next year Timbaland became more solid as he co-produced Justin Timberlake's "Justified" with The Neptunes. In the verge of quitting NSYNC, all Justin needed was a record that won't jeopardize his career as singer. Timbaland and the rest of the crew made it more than that. "Justified" marked Justin's credibility as a solo artist and was sold 7 million units worldwide. By then, the term 'Timbaland Sound' was going everywhere. His unique mixing of usual hip-hop sound with Eastern instruments is seen as a spark of genius. He went on to produce commercially successful singles for artists such as Xzibit, LL Cool J, Fat Man Scoop, Jennifer Lopez and even Japanese singer Utada Hikaru. Throughout 2003 until 2005 he has worked with more renowned artists than any producers, but still his name was not 'deafening' enough. It was in 2006 that he exposed two of his greatest works that gained more sonorous reviews than before. Begun with Nelly Furtado's "Loose", he nailed hits such as "Promiscuous" and "Say It Right". Both were chart topping singles that stayed in the list long enough to catapult Furtado's reputation. At this time, Timbaland started to make video appearances while his name was mentioned as the featured singer. After that, he made an even bigger bang through Justin Timberlake's sophomore album "FutureSex/LoveSounds" that earned JT the coinage "SexyBack singer".

Thanks to the career span that allowed him to make friends with many musicians. He earned their respect that many were willing or even honored to work with him. Incredibly, for his second solo effort "Timbaland Presents Shock Value" (2007) Timbaland just didn't stick around to hip-hop and R&B. He opened up to a whole range of music genres by collaborating with The Hives, She Wants Revenge, Fall Out Boy and Elton John. In the peak of his career, he had one thing kept in his mind throughout the years. "You can accomplish anything you put your mind to if you stay persistent and disciplined," he said.

Keeps his personal life very personal, Timbaland quietly engaged to his publicist, Monique Idlett, whom he's been dating for two years. They have one daughter together.