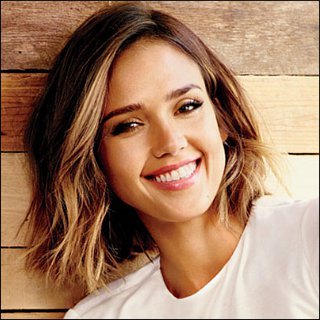 Jessica Marie Alba, born on April 28, 1981, in Pomona, California, is an actress. She grew up a sports fanatic with rebellious behavior which becomes understandable as she was raised in a nomadic military family. Jessica was born to real estate agent Mark Alba and housewife Cathy. Her brother, %cJoshua Alba%, is an actor as well. She once co-starred in one episode of "Dark Angel" with him, entitled "...And Jesus Brought a Casserole."

Nicknamed "Sky Angel," Jessica made her feature film debut in the 1994's "Camp Nowhere." Initially played a two-weeks role, the chance to become famous approached her when she was pointed out to fill in the principal role actress' slot who suddenly dropped out of the project. Her two-weeks then stretched to two-months with a remarkable act of hers. Widely known for her serious preparation in preparing a role, Jessica, who is a golf fanatic, has started training in dance and Tae Bo two months before the production of her 2003 movie "Honey." However, it was her role of the genetically-engineered super-soldier, Max Guevara, on the FOX sci-fi TV series "Dark Angel" that brought her to her career breakthrough despite the fact that she already rose to Hollywood's prominence with her starring role in the %cDrew Barrymore% romantic comedy "Never Been Kissed" (1999), and as the female lead in the 1999 comedy-horror film "Idle Hands", opposite %cDevon Sawa%.

It was this series that brought Jessica her most notable roles as exotic dancer Nancy Callahan in "Sin City" (2005) and as the classic Marvel Comics character Sue Storm, the Invisible Woman in the "Fantastic Four" (2005). Kept adding more big screen projects into her acting resume, Jessica had herself explored various kinds of characters, signed on as the cast of the psychological thriller "Awake" (2007) which reunited her with famous actors, like %cLena Olin%, %cTerrence Howard%, %cSam Robards%, and %cHayden Christensen%. While awaiting for the film to be released on theaters, she explored the comedy genre, starring in "The Ten" and "Good Luck Chuck" which saw her starring as Cam Wexler, a sometimes clumsy girl who nevertheless appears quite friendly, that becomes the love attraction of Chuck, %cDane Cook%'s character. Notwithstanding with the very negative reviews from critics, the film was number two at the U.S. box office in its opening weekend, grossing $13.6 million in 2,612 theaters. Kept sticking to comedy genre, Jessica took part in the dramedy "Bill," while at the same time took time reprising her role of Sue Richards, the Invisible Woman, in the next installment of the superhero film "Fantastic Four," entitled "Fantastic Four: Rise of the Silver Surfer."

Also reprising her role of Nancy Callahan in "Sin City 2" (2008), Jessica could as well be seen starring in "The Eye," a remake of a 2002 Hong Kong film of the same name and once again throwing her comedic sense in "The Love Guru," both slated to hit theaters in 2008.

As for her love life, Jessica once was involved in a longterm relationship with her "Dark Angel" co-star %cMichael Weatherly% to whom she briefly engaged. Not long after their break up, the screen beauty began dating movie director Cash Warren.