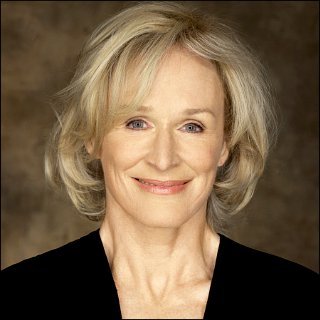 A versatile actress of great talent and grace who has acquired numerous honors and laudation throughout her long career, Glenn Close indeed has penned her name solidly in the show business as one of the most prominent thespians the world ever has. Coming from the upper-class family of English descent, she was born to William T. Close and Bettine Moore on March 19, 1947 in Greenwich, Connecticut. This blond girl then spent most of early life alternately between Switzerland's boarding schools and the Belgian Congo, or later known as Zaire, Africa where her father worked as a doctor while also operated a clinic for 16 years. Always has a deep love for acting, she started to establish her way in acting field during her teens, including forming a theater group at her school, Greenwich's Rosemary Hall, and joining the original stage productions of a conservative folk-singing group, Up With People, for a couple of years.

Upon her graduation from College of William and Mary in Williamsburg, Virginia with the B.A. degree in drama and anthropology, Glenn fixed her mind to pursue an acting career thus headed for New York to find herself delightfully joined the Phoenix Theatre Company in 1974. Afterwards involved in a series of Broadway productions, such as “Love for Love” and “Rex,” she also took some of her time to land appearances on screen through a handful of TV-movie features, like “The Rules of the Game” (1975) or “Too Far to Go” (1979). Her life then encountered a significant change when she performed in musical play of “Barnum” (1980) as it not only led her to earn the Best Actress (Featured Role--Musical) nomination at Tony Awards in the same year, but also prompted George Roy Hill to offer her a role in his next film.

Eagerly accepted Hill's offer to be included in the cast of "The World According to Garp" (1982), Glenn wonderfully made such an impressive big screen debut so that the Academy of Motion Picture Arts and Sciences granted her a nomination for Best Supporting Actress category in 1983. This achievement amazingly was repeated in the two following years through her next pictures, “The Big Chill” (1983) and “The Natural” (1984), urging many people to take more attention on her, especially after she was named Best Actress in a Play at the 1984 Tony Awards. However, it was not until she starred in Adrian Lyne's “Fatal Attraction” (1987) that her name became widely recognized around the globe which automatically boosted her career increasingly. Totally changed her screen persona in this disturbing thriller flick to a menacingly vengeful and psychotic woman named Alex Forrest, she satisfyingly garnered tremendous accolades from both critics and audience.

Once more received an Oscar nomination at its 1988 event through that film, this time for the category of Best Actress, Glenn scored the same attainment a year later for her portrayal as a manipulative aristocrat in “Dangerous Liaisons” (1988) opposite John Malkovich, but again failed to bring home the award. Even so, her star indeed still shone brightly for she managed to be cast in some high-profile movies of various genres throughout the half of 1990s, such as “Hamlet” (1990), “The House of the Spirits” (1993), and “The Paper” (1994). During this period, she kept collecting honors either from her stage appearances or screen performances, obtaining two other Tony Awards for Best Actress category and winning one out of three Emmy Awards nominations while also being the nominee of Golden Globe Awards and Screen Actors Guild Awards.

Spent the rest of the 90s to be involved in several smash hit pictures, like the live action version of “101 Dalmatians” (1996), “Mars Attacks!” (1996), and “Air Force One” (1997), Glenn welcomed the third millennium with her strong enactment in “Things You Can Tell Just by Looking at Her” (2000) alongside Cameron Diaz plus Calista Flockhart. Reprised her role as Cruella de Vil in “102 Dalmatians” (2000), she crossed to NBC's acclaimed comedy series of “Will & Grace” (1998-2006) to be a guest role there and surprisingly got an Emmy Award nomination in 2002 for the category of Outstanding Guest Actress in A Comedy Series. Her status as a qualified Hollywood actress grew stronger when she was cast to play Eleanor of Aquitaine in “The Lion in Winter” (2003) for she gloriously grabbed two prestigious film credits of Golden Globe Awards and Screen Actor Guild Awards in 2005 after previously being nominated for another Emmy in 2004.

Enthusiastically joined the 2004 remake of “The Stepford Wives” along with Nicole Kidman, Glenn apparently put more of her focus on big screen productions as she later was seen in “Heights” (2004), “Nine Lives” (2005), and “The Chumscrubber” (2005) while only appeared briefly in FX Networks' program, “The Shield” (2002). Fabulously scored one more nomination at the 2005 Emmy Awards through that series, she went on to keep filling her resume with her next projects of “Therese Raquin” and “Sunset Boulevard” which both came up in 2006. As for her private life, Glenn once married to Cabot Wade in 1969, then James Marlas in 1984 before they finally separated in 1987. She afterwards had been involved in a series of love relationships, including with Woody Harrelson, Robert Pastorelli, and producer John Starke who has become the father of her daughter, Annie Maude on April 26, 1988. By the year 2006, however, she ended up in David Shaw's arms as she eventually decided to marry this founder and former head of Idexx Laboratories Inc. on February 3 in a small private ceremony in Maine.

Aside from her status as an accomplished actress, Glenn is also known as a successful producer, a profession she has flourished since 1991 beginning from the production of TV miniseries of “Sarah, Plain and Tall.” This initial effort delightfully brought her to receive a nomination for Outstanding Drama/Comedy Special and Miniseries at the 1991 Emmy Awards. Less than five years, she once again scored another nomination at the same event in the category of Outstanding Made for television Movie through “Serving in Silence: The Margarethe Cammermeyer Story” (1995). Up to the year 2001, she had made a total of eight TV-movie features which also included “Journey” (1995), “Baby” (2000), “The Ballad of Lucy Whipple” (2001), and “South Pacific” (2001).