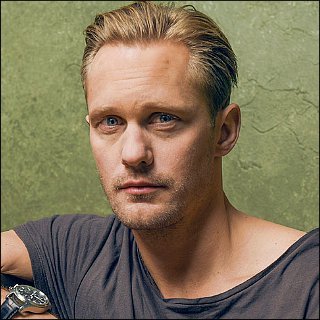 Alexander Skarsgard, apparently, inherited acting skills from his actor father %cStellan Skarsgard% and thus wanted to pursue acting since he was a child. At 7 years old he starred in his first film, the 1984 "Ake and His World". After starring roles in several minor films and TV shows, he achieved his big break through the 1989 film "The Dog That Smiled". The film's success helped catapult him to fame, which he found "scary" and thus he decided to quit acting.

Then, at age 19 Skarsgard joined an antiterrorist unit in the Swedish marines. During his 15 months in the marines, he trained in hand-to-hand combat, small-squad battle tactics and anti-sabotage attacks which later on were very useful and helpful for his acting career, especially when he was cast as Marine Sergeant Brad "Iceman" Colbert in the acclaimed HBO miniseries "Generation Kill". His performance earned him critical acclaim which prompted him to being cast as Viking vampire Eric Northman in HBO smash series "True Blood".